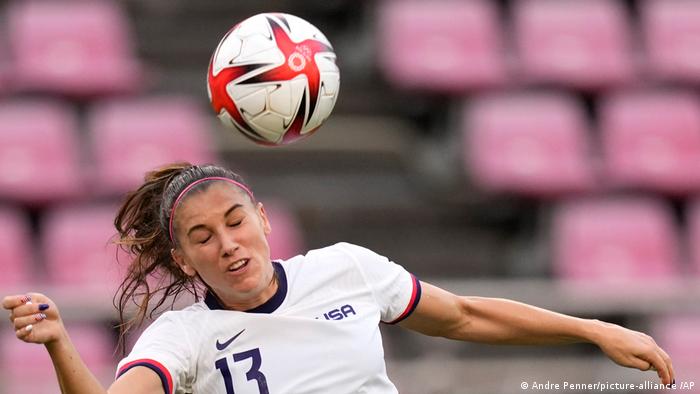 Canada's women's football team will play for the gold medal after eliminating the United States with a 1-0 in their Monday semifinal.

Jessie Flemming converted from the spot in the 74th minute to put Canada into Friday's women's football final. The victory comes after the Canadians had failed to win their previous 36 meetings against their southern neighbors.

The US suffered an early blow when goalkeeper Alyssa Naeher, the heroin of their quarterfinal victory over the Netherlands, landed awkwardly and was forced to leave the game with a leg injury.

The video assistant referee awarded Canada a penalty after Tierna Davidson challenged Deanne Rose on the edge of the box. Flemming converted from the spot past backup American goalkeeper Adrianna Franch.

The US, winners of the last two Women's World Cups, will play for bronze on Thursday.

Here's a roundup of the latest news and results from the Tokyo Olympics: 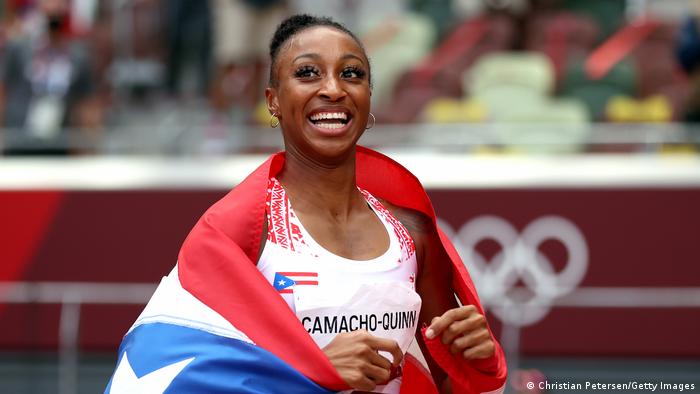 Puerto Rico picked up its first-ever gold medal in athletics when Jasmine Camacho-Quinn won the women's 100-meter hurdles. Camacho-Quinn, who set an Olympic record in the semifinals, was shoulder-to-shoulder with American Kendra Harrison before accelerating through the finish. It's the second gold medal the Caribbean US territory has won at the Olympics. 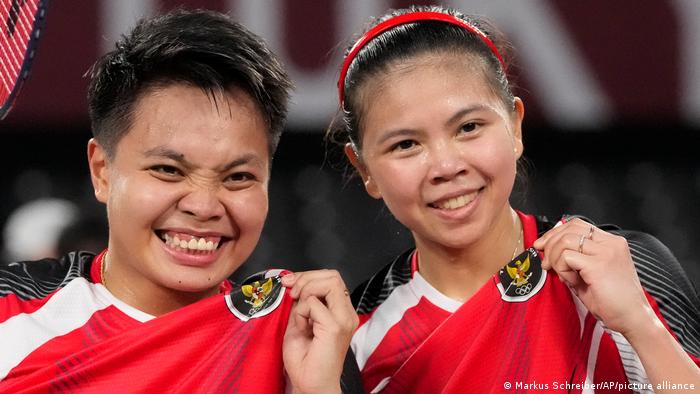 In badminton, unseeded Indonesian duo Greysia Polii and Apriyani Rahayu won the women's doubles gold medal, the first gold for the archipelago nation in the event. They shocked the heavily favored Chinese duo Chen Qing Chen and Jia Yi Fan in straight sets 21-19, 21-15 in an emotional final. The 33-year-old Polii, who was persuaded not to retire and pair with Rahayu, said her years of "passion and commitment" had been rewarded.

In gymnastics, Jade Carey of the US won gold in the women's floor exercise. China's Liu Yang took the gold in the men's rings final, while Shin Jeahwan of South Korea claimed the men's vault gold medal.

At the equestrian park there was another triumph for the German riders. Julia Krajewski rode to individual eventing gold with Amande de B'Néville despite a time penalty on her final round. She thus defended her lead, which she had previously captured in the jumping competition as part of the team competition.

Germany's first athletics medal of the Tokyo Games was claimed by Kristin Pudenz, who took silver in the women's discus. A personla best throw of 66.86 wasn't enough to beat out Valarie Allman of the United States.

After losing just once in the group stage, Germany's women's hockey team are heading home following a 3-0 loss to Argentina in the quarterfinals.

The IOC confirmed that Belarusian sprinter Krystsina Tsimanouskaya is safe after she refused to board a flight home at the direction of Belarus' Olympic team. She confirmed to Reuters news agency that coaches told her to pack after she objected publicly to being entered in the 4x400-meter relay without her consent.

The International Olympic Committee (IOC) is investigating a gesture American Raven Saunders made during the medal ceremony of the women's shot put. Saunders, who won silver, raised her arms in an "X" above her head, a potential breach of rules banning protests on the podium. Saunders responded on Twitter to the investigation, writing: "Let them try and take this medal."

Pioneering transgender weightlifter Laurel Hubbard crashed out of her Tokyo Olympics final Monday after failing all three of her lift attempts in the snatch section of the +87kg weightlifting category.

The Island nation of Bermuda won its first-ever Olympic gold medal as Flora Duffy emerged victorious in the women's triathlon. She finished more than a minute ahead of her rivals on a stormy course.