Tokio Hotel scale the charts thanks to their media savvy

Four kids from a small town in eastern Germany have turned themselves into one of the country's biggest selling acts. Tokio Hotel have sold over six million albums. 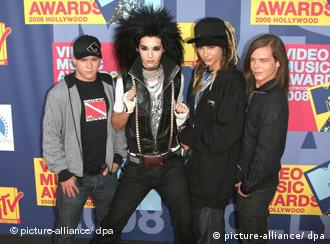 They grew up as rock stars - what's next for Tokio Hotel?

Screaming teenage fans, chart-topping numbers, and, of course, that hair: the four boys from Tokio Hotel have hit the big time well beyond Germany.

Twins Bill and Tom Kaulitz got a very early start making music, thanks in part to the encouragement of their stepfather. At nine years old, they were already hitting the stage and got to know the other two precocious musicians that would join the band.

They played under the name Devilish in the local club scene around Magdeburg in eastern Germany, as well as at band contests. But things really kicked into gear in 2003 when singer Bill Kaulitz took part in a casting competition and was discovered by a team of music producers.

For two years, the band worked on their debut album and took singing and music lessons. All along, there was no question that they were going to end up in the public eye. With Bill Kaulitz's androgynous look and eye-popping outfits, German magazines like Bravo and Münchener Magazin were more than happy to put them on their covers and follow their every move.

"Germany's New Superstars" ran one title in Bravo - before the band had even put out a song. It's no wonder that their debut single "Durch den Monsun" ("Through the Monsoon") went straight to the top of the charts.

"We had incredible luck," said then 15-year-old Bill Kaulitz. "It's really hard to get in touch with the right people."

Luck, along with a good deal of hard work - that's the band's recipe for success. The boys were ushered relentlessly from interview to interview by their record label, and there was just no avoiding them in German media between 2005 and 2008, like it or not.

Even the somewht more critical news magazine "Stern" reported on the band in a long story entitled "Nirvana for Teenies." Singer Bill Kaulitz was a media darling wherever he went - with his heavy eye makeup, heaps of done-up hair, tongue piercing and attention-grabbing outfits. The look drew in no shortage of young female fans either.

Setting feelings to hard rock sums up the band's approach to music, making them part of the "emo" scene, where emotions are given free reign in the lyrics. The texts are drawn from real life and partly autobiographical situations, with predictably heavy doses of anger, love and pain. 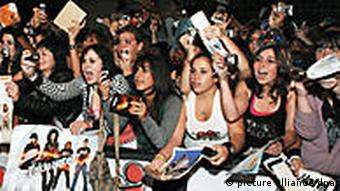 Having lots of fans is sure to prompt a fair amount of detractors, and listeners have long had a love-hate relationship with Tokio Hotel. They're a sure target for comedians and Internet smear campaigns. In 2006, Bill Kaulitz was dubbed the "most annoying German" during a national TV show.

But don't be fooled by the negative press. The band's success has never relented. They've won numerous German music prizes, are hailed as superstars in a number of countries, and their last two albums have landed in the top 40 in the US charts. In Israel, 6,000 fans even petitioned the band to play a concert there - with success.

Along the way, the band has made a couple of changes to their approach, including recording some songs in English, even after having inspired no small number of their fans abroad to take up learning German.

Things have been a bit quieter in the last couple of years for Tokio Hotel, however. They've taken part in a couple of benefit projects, and Bill Kaulitz was once seen trotting down the runway for a designer during Milan Fashion Week.

But there's no discussion of the band breaking up after their precocious string of successes. The already seasoned musicians are sure to strike again, but the real question is - what will Bill Kaulitz's hair look like?

Don't know Nena from Lena? Can't tell Kraftwerk from Rammstein? The Eurovision Song Contest is back, putting German singers in the limelight, and DW takes the opportunity to look at German constributions to rock and pop. (08.04.2011)