Three German Stone Age enthusiasts have set off on a two-week hike during which they will live and eat like our ancestors 7,000 years ago. The so-called "Ötzi Walkers" aim to inspire interest in the Neolithic era. 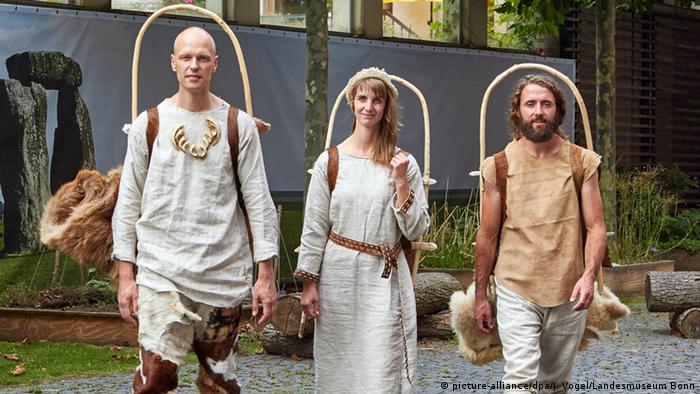 The three walkers, Marco Hocke, Veronika Hocke and Lukas Heine (seen l-r above), began their more than 200-kilometer (120-mile) hike through the German state of North Rhine-Westphalia on Sunday in the city of Detmold.

During the experimental walk, which will eventually take them to the former German capital of Bonn, they will wear animal skins and rough linen tunics, and eat the food that humans cultivated in the Neolithic era 7,000 years ago - peas, lentils and barley.

"They weren't cavemen anymore," archeologist Marco Hocke said. "They were already very advanced, organized and were planting the first crops."

He said they also hoped to gather food on the way, including the common bedstraw plant.

The trio, which also includes a biologist and a teacher, will sleep in the open air, using sacks filled with straw as bedding.

The experiment is aimed at seeing how modern humans cope with living under Stone Age conditions.

The project is being named after "Ötzi," the name given to the mummified remains of a man found frozen in the Ötztal Alps on the Austrian-Italian border in 1991. "Ötzi," who is now on display in a museum in Bolzano, Italy, is thought to have lived around 3,300 BCE.

Although the group is taking self-made tools modeled on the ones used in the Stone Age, some of their equipment would likely have surprised our far-off ancestors: they will use smartphones and cameras to document their experiences, recording them in an internet blog.

The Hockes and Heinen said their walk was intended to arouse interest in the Neolithic era ahead of a museum exhibition, called "Revolution Early Stone Age," that is to open next month in Bonn.

Ötzi, a human specimen who died five millennia ago in the Tyrolean Alps, is offering up new clues to what life was like during the Neolithic era, including revelations on his diet and dental health. (27.06.2011)