Threat to Pakistani nuclear arsenal is real, say experts | Asia| An in-depth look at news from across the continent | DW | 14.08.2009

Pakistan's nuclear weapons facilities were attacked three times in 2007 and 2008 by extremists, a recently published report says. The incidents highlight how difficult it is to keep the weapons safe. 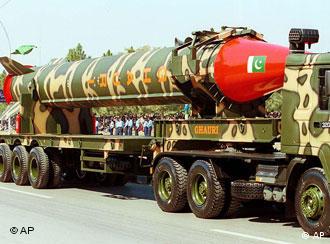 For the international security community it is considered a worst-case scenario. The prospect that terrorists could get their hands on nuclear weapons has been worrying non-proliferation analysts for years. And ever since al Qaeda has stated its intent to acquire such weapons, those worries have only increased.

Just last month, the leader of the terror group in Afghanistan said in an interview with Al Jazeera television that al Qaeda would use Pakistan's nuclear weapons against the US if it could get its hands on them. And according to an article by Shaun Gregory, head of the Pakistan Security Research Unit at the University of Bradford, there are plenty of reasons to take that threat seriously. As Gregory details in a piece for the Combating Terrorism Center of the US military academy at West Point, extremists have attacked Pakistani nuclear weapons facilities twice in 2007 and once in 2008. Gregory concludes that the Taliban and al Qaeda present a "real and present danger" for Pakistan's nuclear weapons.

Pakistan's military denied there was a danger that the country's nuclear arsenal could fall in the hands of terrorists and said that no nuclear arms were involved in any of the three incidents. In the US, the Pentagon affirmed that it is comfortable with the measures Pakistan has in place to protect its nuclear weapons.

Still, despite these official assurances, experts maintain that the threat to Pakistan's nuclear arsenal is ongoing and must be taken seriously.

"Probably the smallest problem is the danger of theft of an operational nuclear weapon," says Oliver Meier, international representative of the Arms Control Association. Because Pakistan stores the components of its nuclear weapons separately during peace times, it would be impossible to steal an operational weapon. "What is worrying though is that components of nuclear material may be stolen or lost and that could also be used of course for a radiological attack," he said. 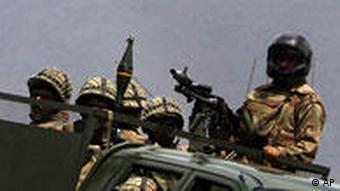 While storing nuclear weapons parts separately prevents theft of an operational weapon, there is also a downside to the practice, explains Jochen Hippler, a Pakistan expert at the University of Duisburg. "On the other hand spreading out the nuclear warheads - and we may be talking about 60 to 70 warheads - increases the number of facilities where they are stored. So even without knowing where they are, it's not unlikely that the Taliban might attack a military facility which does have nuclear components being stored there."

So while it appears highly unlikely that extremists can steal an assembled nuclear weapon in peace time, a more realistic scenario involves the cooperation between terror groups and individuals with access to Pakistan's nuclear secrets.

"There is quite a large danger that people inside Pakistan's nuclear complex might feel tempted to share material or knowledge that could be used to build nuclear weapons with terrorists," says Meier, citing the example of a former director of Pakistan's Atomic Energy Commission who was in touch with Osama bin Laden in the late 1990s. "So we've had instances that give cause to worrying."

Meier concedes that the Pakistani government has a system of screening and checking its nuclear personnel in place. "But given the fact that there are between 7,000 and 8,000 scientists working in the nuclear weapons complex and probably as far as we know about 70,000 people all in all working in the nuclear weapons complex, this is a very large number of people to keep screening."

However, Meier's colleague, Jochen Hippler argues that the threat of Islamists infiltrating the Pakistani military has significantly decreased in recent years. "I would make the point that it is definitely less of a danger than it was 10 or 20 years ago. It was a big deal in the Zia-ul-Haq times."

Hippler adds that if the international community really wants to secure Pakistan's nuclear weapons then it has to do more than just focus on the country's arsenal. "The Taliban will never be able to conquer the country militarily," he says. "There is no way to do that. But on the other hand, the Pakistani state may just fail because of incompetence, lack of organization, corruption and because the Pakistani political elite are incredibly incompetent and greedy." 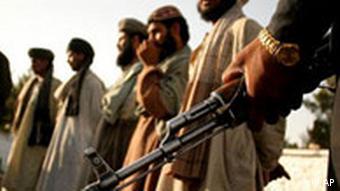 The Taliban operate from both Pakistan and Afghanistan

To effectively safeguard Pakistan's nuclear arms cache, the West needs to devise a strategy to stabilize the country on a whole. And in order to do that, argues Hippler, Western countries need to reevaluate their priorities in the region.

"If we think Pakistan is more important than Afghanistan, which it definitely is because of nuclear weapons, because of 170 million people, because of millions of Pakistani migrants in Britain and Canada and elsewhere, then that has to have some repercussions for our Afghan strategy and for our stabilizing strategy for Pakistan."

The new head of NATO Anders Fogh Rasmussen says he is ready to open a dialog with moderate Taliban elements. His comments come amid reports that western soldiers were killed by insurgents in Afghanistan on Saturday. (01.08.2009)

Pakistan's defense minister, on a visit to Berlin, has asked for international assistance in the fight against terrorism in his country. (06.05.2009)