Thousands of people have marked the summer solstice at the ancient stone circle of Stonehenge on Salisbury Plain in southern England. Police say the event was a success, with only a few drug-related arrests. 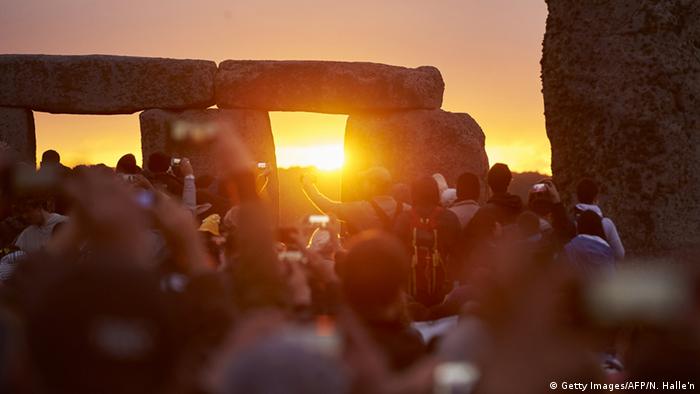 Police from the county of Wiltshire said some 23,000 people gathered at the World Heritage Site early on Sunday to briefly see the sun rise before it vanished again behind clouds.

Among the visitors were several self-styled Druids, who perform rituals at Stonehenge every year to mark the official start to summer. Others danced to the sound of drums and accordions.

The number was down on the 36,000 who went to Stonehenge last year to celebrate the solstice at the famous site, located about 80 miles (130 kilometers) southwest of London.

At the summer solstice - the longest day of the year in the northern hemisphere - the sun rises in alignment with some of the main stones, leading to widespread speculation that this phenomenon may have been intended by the circle's builders as something of religious significance.

Police Superintendent Gavin Williams, who was in charge of police supervision at the scene, said celebrations had been largely trouble-free.

"Solstice 2015 has been a great success with approximately 23,000 people celebrating at Stonehenge in the positive, friendly atmosphere as the waited for the sunrise," he said, adding that nine people had been arrested, fewer than last year.

The main stones at Stonehenge are thought to have been set up some 4,500 years ago. Historians and archeologists are still pondering over what its function and purpose may have been.

Researchers have uncovered a number of previously unknown structures around Stonehenge. According to them, the new digital map based on their research will transform the understanding of the iconic ancient monument. (10.09.2014)