People around the globe are grieving over the death of "Queen Mum". World leaders called her a "pillar of strength." The mother of Britain's Queen Elizabeth was 101 years old. 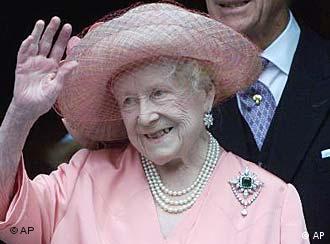 The smile that will greet us no more

Everyone agreed: Queen Mum was the most popular member of Britain's Royal family. She was an integrating force and a pillar of strength in times of turmoil.

She earned much of her popularity more than half a century ago during the Second World War, when her husband King George VI held the throne. During the Nazi bombing raids on London, she deliberately stayed in the city with her children Elizabeth and Margaret. Advisors had suggested to her that they would be safer in Canada. But in a courageous show of solidarity, the Queen stayed with her people: "The children will not go without me, I will not leave the King and the King will never leave," she declared.

As the Nazi Luftwaffe flew its nightly bombing raids on London, leaving behind death and destruction, the Queen stayed in the city to comfort her countrymen. The newsreels repeatedly showed her visiting bombed out homes, caring for the victims of the Blitzkrieg.

She knew how important it was to show solidarity with the Londoners and boost their morale. And the people of Britain greatly appreciated this.

The effect wasn't lost on the German dictator Adolf Hitler. He called her "the most dangerous woman in Europe."

Tributes for the last figurehead of the war

British Prime Minister Tony Blair made reference to the days of World War Two in his tribute to Queen Mum. "Her bravery...during the Blitz epitomized both her own indomitable spirit and the spirit of the nation in its darkest hours," Blair said.

Canada's Prime Minister Jean Chretien, who spoke on behalf of Britain's Commonwealth allies, struck a similar note. "Above all, she will be remembered for her matchless and galvanizing devotion to duty during the darkest hours of World War Two when Britain, Canada and the Commonwealth stood alone against a seemingly invincible tyranny," he said.

Germany's President Johannes Rau called Queen Mum a great woman. He said she had become a model not only for the people in Britain. Rau described her as someone who approached others in a "friendly, sympathetic and interested" manner. The people of today's Germany felt that and that's why they took her to heart, Rau said.

In a note of condolence to Queen Elizabeth II and to the people of the United Kingdom, U.S. President George W. Bush said he was "deeply saddened" by the death of the Queen Mother. He said she had been an inspiration to people the world over.

The death of Queen Mum was yet another blow to Britain's royal family in a short time. It's only been six weeks since Queen Elizabeth's younger sister, Princess Margaret, died aged 71.

In recent weeks, Queen Mum's declining health had been a constant cause for concern to the Royals.

The Queen Mother had been a rock of support for many members of the family. Her eldest daughter Queen Elizabeth II, 75, relied on her for advice, as did Britain's heir to the throne Prince Charles.

Charles was said to be "absolutely devastated" upon hearing his adored grandmother had died. He said she was "one of the most remarkable and wonderful people in the world".

The mother of Queen Elizabeth died in her sleep on Saturday afternoon at the age of 101, with her daughter at her bedside. The funeral will take place on April 8 at Windsor.

Official website with imformation about the death of Queen Mum and preparations for the funeral.