In Germany, St. Nicholas visits homes on December 6. It's now an integral part of the pre-Christmas tradition here. What are its origins? And who was St. Nicholas? Test your knowledge! 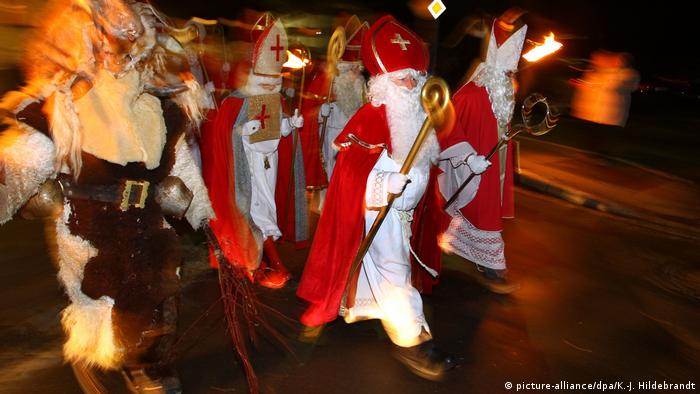 Nobody knows exactly when he lived. The legend of the Bishop of Myra dates back to the fourth century. Nicholas inherited his wealthy parents' fortune and distributed it among the poor and sick.

The name comes from the Greek "nike" (victory) and "laos" (people). So Nicholas translates as the "people's victor." Nowadays he still gives children presents. But be careful! He doesn't always come alone. At his side is his servant, Knecht Ruprecht, who punishes naughty children.

St. Nicholas is often associated with Father Christmas in Britain and, of course, Santa Claus in the US. The name is actually derived from the way the Dutch call St. Nicholas, Sinterklaas. In the English-speaking world, the saint brings presents at Christmas. It all has little to do with the historical figure.

In the Netherlands, St. Nicholas arrives on December 5, a day before he moves on to Germany. The Dutch tradition says he sometimes comes by ship, as he's also considered the patron saint of merchants and seafarers.

How do the Germans celebrate St. Nicholas Day?