Jean Reno has excelled in a range of film roles, from action heroes to jokers. He came to Hollywood’s notice playing a paid killer in the French film "Leon: The Professional," starring since in several US blockbusters.

In an interview in the year 2000, Jean Reno commented that he made one French movie for every Hollywood one. It's not clear whether he adheres strictly to this plan, but it is certain that as he celebrates his 70th birthday, Reno can look back on a wide-ranging filmography across a variety of genres. Not only does he jet back and forth between French and American productions; he has also played widely different roles. He's convincing both as a comedian — in the French time-travel comedy "The Visitors" ("Les Visiteurs," 1993), for example — and as an action hero in films like "Mission Impossible" (1996) or "Godzilla" (1998).

Reno's big break was the "The Big Blue" ("Le grand bleu," 1988), in which he plays a free diver who takes up the challenge of a daredevil diving competition. The drama by the French director Luc Besson enjoys cult status today. Reviewers raved about the impressive underwater sequences. In 1989 "The Big Blue" received eight nominations for France's César film awards, winning the categories for best film music and best sound.

It was his ongoing collaboration with the film's director, Luc Besson, that brought Reno to Hollywood. After playing several supporting roles in Besson films, Reno got the lead in the action movie "Leon: The Professional" ("Leon," 1984), which was also the motion-picture debut of the young Natalie Portman. Playing the role of the contract killer Leon set Reno's career on an international trajectory. Hollywood came calling soon afterwards, and Reno was offered roles in a range of American productions including "The Pink Panther," "The Da Vinci Code" and "Flyboys." 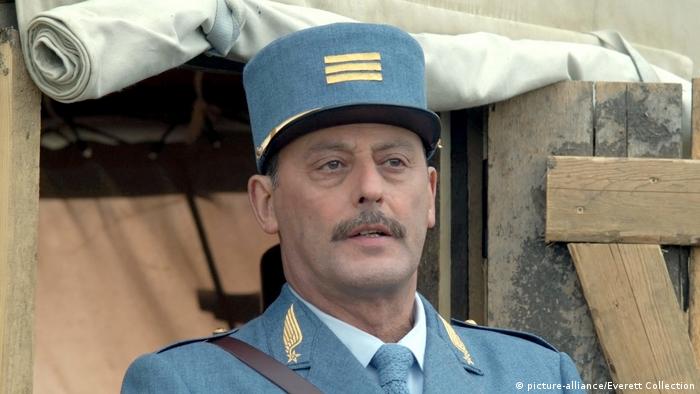 Jean Reno plays the French fighter pilot Capt. Thenault in the WW I film "Flyboys” (2006), which had only limited success

'I do whatever feels right at the time'

Reno now has more than 60 films to his name, and while he's celebrated mainly as an action hero in America, French directors like to cast him roles that require him to demonstrate his comic skills. The 70-year-old actor doesn't like to be pigeonholed, though: He told the German press agency DPA that he doesn't see himself as either an action hero or a comedian, just as an actor who does whatever feels right at the time.

Jean Reno was born Juan Moreno y Herrera Jimenez, the son of working-class Spanish parents, in Casablanca. His parents had fled the Franco dictatorship in Spain for Morocco, which was a French protectorate at the time. When he was 19, Reno took French citizenship, and in the early 1970s, after doing his military service in Germany, he moved to Paris, where he gradually started getting work as an actor. His first – albeit tiny – film role was in Constantin Costa-Gavras' movie "Womanlight" ("Clair de femme") alongside Yves Montand and Romy Schneider.

Reno has six children from three marriages, and has been married to the British actress Zofia Borucka since 2006.

Despite his many successes in US blockbusters, Jean Reno has always remained loyal to the French film industry. For the actor's 70th birthday, we show images from some of his best movies. (30.07.2018)