Two centuries after her birth, the composer, critic, impresario, pianist, celebrity, mother and Robert Schumann's wife — and not necessarily in that order — is recognized as a 19th century power woman. 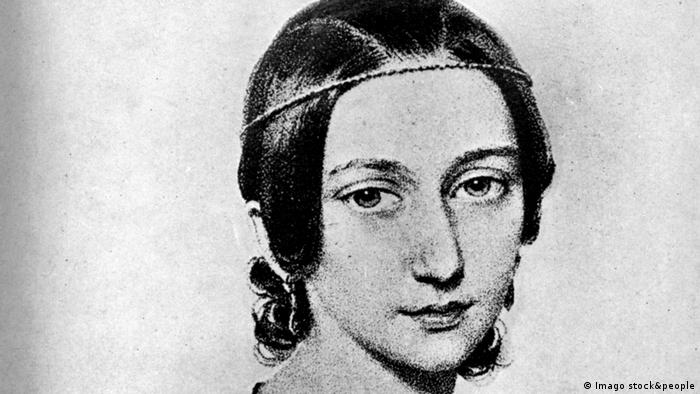 In the Clara Schumann anniversary year, there are special concerts everywhere in Germany and exhibitions in Zwickau, Frankfurt, Bonn and Leipzig. In the latter city alone — her birthplace — there are some 170 events honoring Schumann in 2019. New biographies and diaries of her youth have been published, and Clara Schumann's compositions, long forgotten, are turning up on playbills.

Her image is nearly universally familiar in Germany — at least to those who were around before the euro was adopted in 2002 — as "the woman on the 100 Deutsche Mark bill" that was introduced in 1989. Beyond that, though, Clara Schumann left an indelible mark on music life, one still palpable today.

Bold at the piano, retiring in person

This notable person was born in Leipzig on September 13, 1819 as Clara Wieck. Her divorced father, Friedrich Wieck, was a well-known piano teacher and founder of a piano factory. He gave her tutelage in piano playing according to his own personally developed method from age five. He also had her schooled in composition and in foreign languages, complemented by long walks and physical exercise, which built the child's strength. 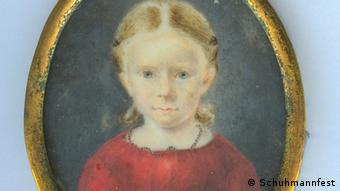 Father and daughter went on extended concert tours — first in Germany, later to Paris and other foreign destinations. Often lasting two or three months, the journeys in a coach were strenuous. Sometimes the piano had to be brought along.

Clara Wieck's playing was described as feisty and passionate. "The girl has more strength than six boys combined," wrote Johann Wolfgang von Goethe after a concert in Weimar. Those who met her in person came away with a different impression. Felix Mendelssohn described her as shy and quiet. In 1838 Franz Liszt called her "a very simple person, very well raised, no coquette, totally absorbed in her art, but in the most noble sense."

Her concert programs, which often included her own works, must have been impressive. Among her pieces was an A Minor Piano Concerto filled with cascading runs and daring leaps on the keyboard, premiered by Clara Wieck on November 9, 1835 as a 16-year-old.

German pianist Ragna Schirmer, who has performed original programs in the Clara Schumann anniversary year, admitted to being "exhausted" afterwards. 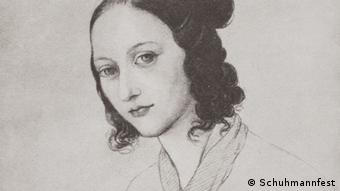 Liszt, Mendelssohn, Goethe, as well as Paganini and Chopin knew the young girl. And: Robert Schumann. She was nine years old when they first met, he a 19-year-old student of law living for a year in the Wieck household to take lessons from her famous father. Intimate friendship evolved into love when Clara was 16. When Friedrich Wieck got wind of it, he forbade any sort of contact between the two, organizing concert tours for his daughter and supervising her day and night.

Secretly engaged to be married in August 1837, the two fought for the right to marry in court. The court ruled in their favor, and Robert Schumann and Clara Wieck married on September 12, 1840, one day before her 21st birthday.

Robert Schumann initially hoped his wife would discontinue concertizing and concentrate on her duties as spouse. Before long though, the couple's financial situation — and her determination — led to her comeback: Her first concert as Clara Schumann came in the autumn of 1840. "I cannot refrain from my art. If I did, I'd never forgive myself," she wrote.

Clara: the internationally celebrated pianist; Robert: the little-known composer. The couple banked completely on his compositional activities however, and because Robert needed peace and quiet in order to work, Clara had to strongly curtail her practicing. Her strongest wish was "that Robert can completely live in and for music and his pleasure, that no care can cast a shadow on his life as an artist."

Despite 10 pregnancies and eight live births, Clara gave at least 139 performances in their 14 years together. Those performances sometimes took the couple far afield, to northern Germany (1842), Russia (1844), Vienna (1846) and the Netherlands (1853). On tour, Robert had to deal with feelings of inferiority at the side of his famous wife. She, for her part, played his works and made them famous to an international audience.

The marriage seems to have been a happy and artistically productive one. The two exchanged musical ideas, Clara advised her husband in his compositional activity and Robert encouraged his wife's own creativity. Yet Clara seems to have absorbed society's attitude at the time, according to which composing was a man's work. Even after her "Piano Trio" of 1845, considered her most successful composition, she wrote: "Of course it's a lady's work, always lacking in power, and here and there uninspired." 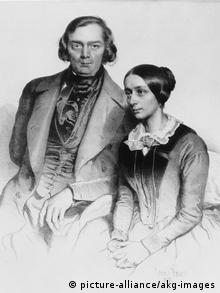 Clara Schumann's half-brother Woldemar Bargiel, visiting the couple in July and August 1852, reported of Robert's frequent spells of illness and how they affected his empathizing wife. It seemed to Bargiel "as if Schumann and Clara had the same physical organism and every feeling of Schumann's flowed into her."

Robert Schumann had suffered from spells of depression and mood swings from his teenage years. Today his condition might be described as a bipolar disorder. In their early years in Leipzig, later in Dresden (from 1844) and in Dusseldorf (from 1850), spells of illness and nervous breakdowns alternated with happier phases.

Plagued by hallucinations, Robert Schumann leaped into the Rhine River in a suicide attempt in early 1854, but was rescued by fishermen and taken to a clinic for the mentally ill in Endenich, near Bonn. On doctor's orders, his wife was only allowed to see him two days before his death on July 29, 1856. 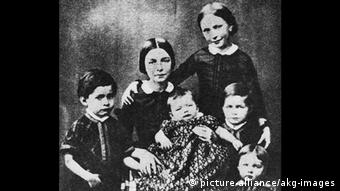 The Schumann children (l. to r.): Ludwig, Marie, Felix, Elise, Ferdinand and Eugenie in a photo from 1855

The 37-year-old, who from that moment on appeared for the following 41 years of her life only in black, had to completely reorganize her life, relocating her children at boarding schools and with family members and resuming concert tours. From 1863-73, those tours took her 19 times to England alone.

A young family friend became a source of support: Johannes Brahms, who'd met the Schumanns as a 20-year-old, one year before Robert's death. The story of Johannes Brahms and Clara Schumann is a love story, but also one speculated on, as the two agreed to destroy their letters to each other. What remains is correspondence revealing Clara as Brahms's best adviser in all matters compositional and affording a fascinating view into the nuts and bolts of the composer's trade.

After years in Baden-Baden and Berlin, Schumann was appointed "First Piano Teacher" at Dr. Hoch's Conservatory in Frankfurt on the Main. Madame Schumann gave lessons in her apartment on Mylius Street. Before long, her students were calling it "Tears and Sighs Street": The Grand Dame of Music was notorious for her withering criticism. Clara was supported in her teaching by two of her daughters. Three of her sons had tragic fates: One was mentally handicapped and lived in a sanatorium, another was schizophrenic and a third addicted to opium. 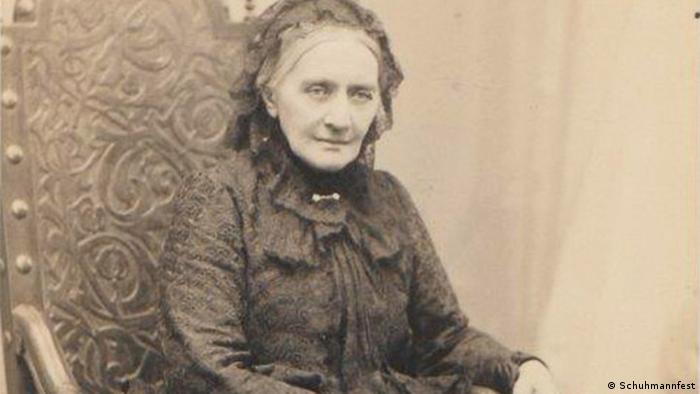 Giving lessons on "The Street of Tears and Sighs"

Clara Schumann died in Frankfurt on May 20, 1896, 77 years old. Apart from her compositions, her most enduring influence probably rests in her concert programs, which evolved from the virtuosic but trifling pieces of her youth to complete sonatas and cycles by a canon of composers including Beethoven, Brahms, Chopin, Mendelssohn, Schubert and Bach — and of course Schumann, whose posthumous fame she tirelessly promoted.

As the 19th century's most important woman pianist, Clara Schumann thus contributed to the piano repertory still expected and performed today. As the publisher of her husband's works, she adapted the songs that Schumann once dedicated to her for piano. But one thing she nearly completely refrained from after his death: composing.

Why composer Robert Schumann was a misunderstood genius

He was an ambivalent genius and a manic-depressive whose tragic end colored our perception of his works. Only in recent years has the music world come to better understand Robert Schumann's creative output and influence. (06.06.2017)

At the Schumannfest, it's about Clara — and other women in music

Wife, mother of eight, pianist, musical adviser, concert manager, composer: Clara Schumann is in the spotlight at Bonn's Schumannfest — along with other female composers and performers. (03.06.2019)

Wagner and the fairer sex

Richard Wagner's women did not have it easy sharing life with the headstrong composer. A symposium at Berlin's State Opera investigates the marks Minna Planer, Mathilde von Wesendonck and Cosima von Bülow left behind. (04.10.2012)

Writing music was long a men's domain. The after-effects are enduring, with women composers still only seldom turning up on playbills. Here are some seldom-heard female composers featured at the Schumannfest in Bonn. (03.06.2019)

Düsseldorf is planning a new museum dedicated to Robert Schumann. Here's more on the ingenious composer, pianist, poet, music journalist, who was also a melancholic manic-depressive plagued by suicidal fantasies. (24.09.2018)