The Netherlands respond to flooding with swimming homes | Environment | All topics from climate change to conservation | DW | 31.12.2009

The Netherlands respond to flooding with swimming homes

Do houses have to be built on solid land? In response to the climate-induced rise in water level, the Netherlands are turning to an unusual new kind of architecture. Soon, some neighborhoods may float on water. 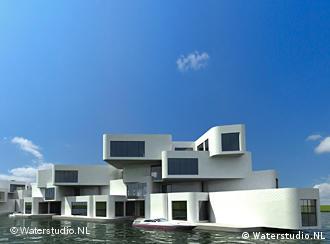 Neighborhoods may soon float on the water near The Hague

Dutch architect Koen Olthuis says it's better for a country that's threatened by water to learn how to live with it than fight against it - an approach that is central to his work.

The Netherlands are one of the most densely populated yet also flattest countries in Europe. The offices of Olthuis' firm are beneath sea-level, as is about a third of the terrain in the Netherlands. Water must constantly be pumped back into the sea.

"We pump away about as much water daily as Tokyo and its surroundings use in a year - an incredible amount," said Olthuis, who decided to specialize in water architecture.

The architect and his team have developed a concept for their country's future: If the Dutch eventually have to allow water to take over some of the nation's coastal land surface, the wet area should be used for houses and apartments. 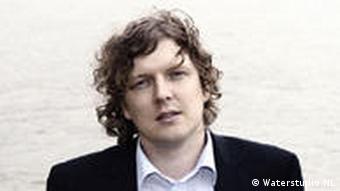 Areas threatened by flooding account for about five percent of the Netherlands' surface. Currently, they are protected from being overtaken by the sea through the use of dams. Keeping this land dry costs the nation billions annually.

Near The Hague, a joint public and private project called "Het Nieuwe Water" is underway, which foresees building 1,200 new buildings within the next eight to ten years. Some of these are to be floating luxury apartments. At present, though, there is little to be seen in the area - just a 2.5-kilometer (1.5-mile) slushy field occupied by a few homes, greenhouses and a pond.

"First we will build, then we will allow the area to be flooded," explained Paul van Zundert, an engineer, who will ensure that the residents do not encounter any problems once building begins. "That will be the biggest challenge that arises from this new dual approach to using the water."

The economic utility of the new buildings will hopefully compensate for the loss of the area's greenhouses.

Architect Olthuis would eventually like to move with his wife and three kids to the flooded coastal area. A single family home there will not be more expensive than a traditional home, he pointed out.

"People aren't interested in having to pay even extra to live on the water. So the only way to go about things is to make the cost of living on the water match that of living on land," he said. Depending on how it is equipped, a floating house will cost several hundred thousand euros.

The new generation of floating houses has little to do with traditional house boats. Olthuis foresees large platforms which contain everything that belongs in a conventional neighborhood: streets, greenery and rows of houses.

"Climate change is causing water to take up space in cities - area that cities can't afford to give up," said the architect. Water collecting in a city center is worthless, he added, but if it can be used as a building site, then it becomes valuable.

The idea is taking hold abroad 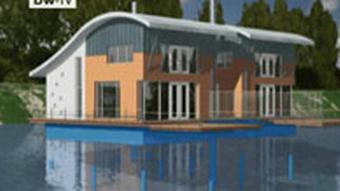 By using flexible tubes, the floating platforms will be provided with electricity and hooked up to the sewage system. Oil platforms currently use similar technologies. But the plans go beyond just building houses on the water.

According to Olthuis, the company Waterstudio.NL has already received requests from foreigners interested in floating water parks or golf courses.

The city of Seoul has inquired about a floating park for its downtown area. There is no land available in the area, but there is a river that runs through the city. And a floating mosque in Dubai is also in the works. The mosque will only be reachable by boat, and it is equipped for local climate conditions.

"We will pump sea water through the walls of the structure so as to cool the building from 50 to 30 degrees Celsius. That will save a lot of energy," Olthuis said.

In Germany, a debate has broken out over a controversial Dutch per-kilometer driving tax. Germany's Green party has spoken out in favor of adopting a similar plan, while others remain opposed. (16.11.2009)

Buildings with grass growing on the rooftops, little brooks running through pedestrian zones, homes built from tree roots - it may sound utopian, but a Belgian architect says it's all possible. (16.07.2009)