The economics of peace (and war)

How much better off would the world be if it stopped preparing for war and invested in peace instead? We asked a researcher with the Institute for Economics and Peace. The answer, expressed in dollars, is staggering. 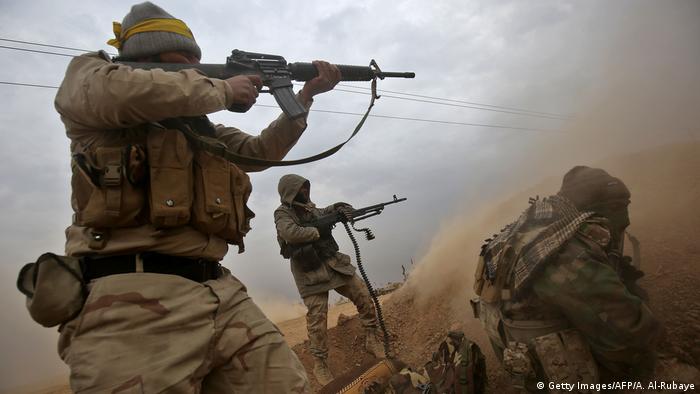 DW: How much does war and armed violence cost per year?

Talia Hagerty: We've quantified the economic impact of violence on the global economy. What we found is that in 2016, the direct and indirect costs of violence amounted to about $14.3 trillion (12.2 trillion euros) in purchasing power parity (PPP), including multiplier effects.

This number includes not only the costs of war, but also of other forms of violence, like terrorism, homicides and violent crimes.

How do you calculate the costs of war?

When a soldier is injured in war, there are direct costs, such as his or her medical care, and indirect costs like lost lifetime wages if he or she is disabled. But there's more. Suppose it cost $100,000 to treat a wounded soldier, who loses five years of wages from inability to work, amounting to another $250,000. That's not the whole cost  because that money could have been spent on something productive, something that adds value. 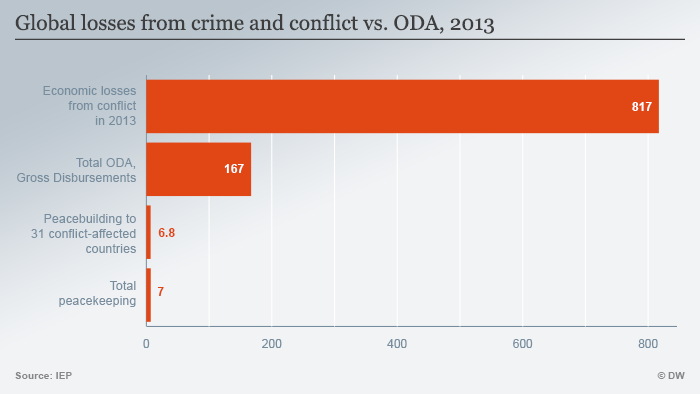 Global peacebuilding expenditure is dwarfed by the direct economic losses from conflict. According to Institute for Economics and Peace (IPE) estimates, current spending on conflict prevention is less than 1 percent of the cost of the consequences of conflicts. By another measure, economic losses from conflicts are five times as large as total development aid from rich countries to poor countries ("official development assistance," ODA)

But isn't war, or the threat of war, good for the economy of nations like the US, Russia, Great Britain, France, or other countries who have big militaries and export a lot of weapons?

Is it good for these nations? No. Might it be profitable for a certain number of firms? Sure. But that's not the whole picture. These national economies you've mentioned prosper in a context of globalized trade. The economic impact of violence on the global economy far exceeds that of the 2008 global financial crisis, for example.

So if we want to have prosperous nations in a globalized world, that means we have to measure every country's economy and look at the total picture — not just measure the prosperity of single nations or individual sectors, like weapons-manufacturing companies.

OK, but doesn't military spending also generate a great deal of hugely valuable technological innovation? For example, transistors and the internet are both the results of funding from DARPA, the US Defense Advanced Research Projects Agency. And the Germans made amazing progress on everything from jet engines to rockets during the six years of their rampage from 1939 to 1945. The urgency of war, or war-like competition, seems to stimulate high creativity and performance in technological terms and thereby also in economic terms.

Of course. It's undeniable that a great number of technological advances have come from military pressures. But what I think you're observing here is that organizing human beings in support of a common goal can achieve amazing things. So should we invest money in research? Of course we should. But does it have to be military research? 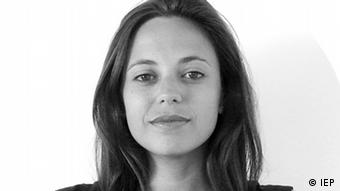 And in fact, those advancements actually came about because of high levels of positive peace, not in spite of them.

Positive peace is the attitudes, institutions and structures that sustain internally peaceful societies and create optimal environments for human potential to flourish.

We've identified eight major factors that are statistically associated with the absence of violence and high levels of internal peace within a country.

6.  Acceptance of the rights of others 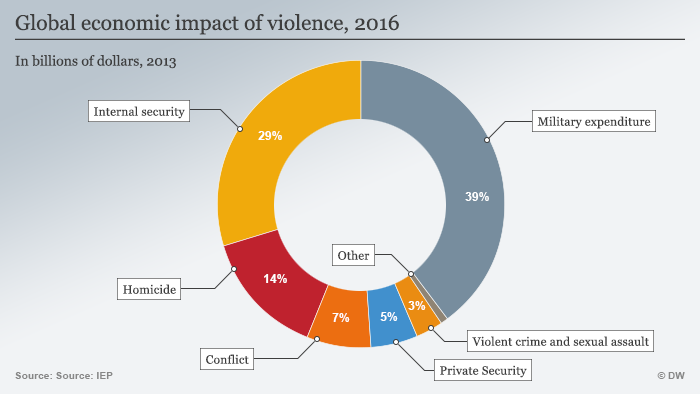 According to Institute for Economics and Peace estimates, government spending on military and internal security comprises 68 percent of the global economic impact of violence

How does this all relate to the Cold War and the amazing technologies it gave rise to?

You didn't see the technological advancements, which gave rise to the internet, come about without high levels of human capital, for example.

But you did see the pressure of the Cold War, and the threat of mutual annihilation between the US and Soviet Union.

Yes. But the mistakes of the past don't have to define the future. In a generous interpretation, people during the Cold War did the best they could with the information and narratives they had at the time. But the study of the economics of peace is really just getting started.

(Picture at top: A man injured by the war in Ramoussa, Syria, December 2016. Photo: Karam al-Masri.)

Talia Hagerty is a Research Fellow with the Sydney, Australia-based Institute for Economics and Peace (IEP), which bills itself as the "world's leading think-tank dedicated to developing metrics to analyse peace and to quantify its economic benefits."