The Disconnect Between Politics and Reality | News and current affairs from Germany and around the world | DW | 24.09.2005

The Disconnect Between Politics and Reality

Nearly a week after the election, Germans are still no closer to knowing who will govern them. In an interview with Deutsche Welle, historian Arnulf Baring reflected on what the poll result actually says about Germany. 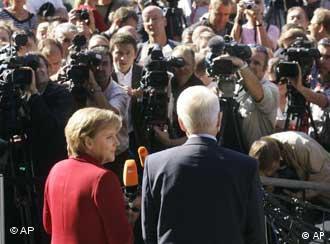 DW-TV: Last Sunday the conservative parties made up of the Christian Democratic Union (CDU) and the Christian Social Union (CSU) got about 36 per cent of the vote, the Social Democrats(SPD) 34 per cent, the pro-market liberal Free Democrats or FDP 10 per cent and the Left Party 7.5 per cent. The Greens won seven per cent. What does this tell us about changes in German society? 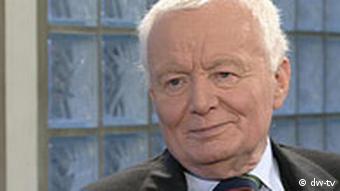 Arnulf Barning: Well, it shows a crumbling of the former major parties, each of which garnered only about a third of the vote. There have been times when together they represented nearly 90 per cent of the country's votes. We will probably experience a kind of normalization now with smaller parties in the future, and a corresponding problem in building coalitions to form a government. We'll have to get used to this and to much longer negotiations between the parties.

Why do you think the major parties suffered such losses? Has something changed within the cultures of the parties?

I think so. We used to always say that the Social Democratic Party was the party of the workers, the employees and the union leaders. And so it was. And the CDU/CSU was the party of Catholic farmers in Bavaria. But these groupings have lost their cohesion. And in recent German history we are seeing the increasing isolation of individual voters. They are no longer affiliated to any particular tradition or grouping and guided by them. They are subjected to much more diverse influences.

For some, the German Automobile Club has become more important than the Catholic church. So there is a certain disintegration and a corresponding problem for parties in articulating a clear platform. That's because they no longer know for whom they are creating the platform.

The smaller parties have done incredibly well. We actually have a five-party system. How would you structure the parties, could you describe them in a little detail?

Well, let's look at politics as a process of action and consolidation with "action" being those who think that much needs to be changed to prepare for the future and "consolidation" referring to those who want everything to be as it always was because things are fine.

Leading the "action" camp are the Free Democrats. They want to go in one direction, and I believe in the future this will be unavoidable, regardless of personal ideological prejudices. And the party of "consolidation" is clearly the Left Party. They basically want to run the country using the same recipes we used in the 1970s. 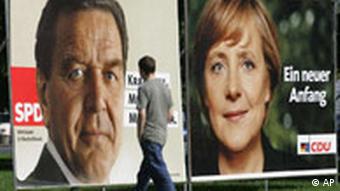 The other parties -- the SPD, the conservatives, and even the Greens are all somewhere in between. They are part "action" and part "consolidation." Even among the conservatives there was a great deal of reluctance to implement a bold, FDP-style program under Angela Merkel.

And it is precisely this inner split which has caused insecurity within the major parties -- how much of our tradition can we maintain, how many new ideas do we have to adopt?

The old mathematics which determined coalition constellations no longer works. It used to always be one large party, together with a smaller party, would form a relatively stable government. So what's going to happen now?

Personally I still believe all the talk about triple groupings going on at the moment is hot air. The red/green/yellow coalition, the so-called traffic light coalition, and then the black/yellow/green coalition. Given the current state of consciousnesses and lack of groundwork, I don't believe a reasonable coalition of this type will get off the ground. I just don't see it. 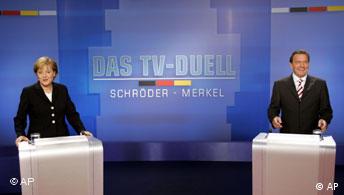 I believe instead that the common ground between the CDU and the SPD is in reality much larger than people are discussing today. I noticed this in the debate between the chancellor and Angela Merkel -- how often she mentioned initiatives on which both parties had worked together. I had the feeling that the Grand Coalition was actually much more of a possibility than the campaigning suggested.

Do you think this election represents a final break with the old Federal Republic of Germany, and the beginning of the Berlin Republic in a unified Germany? 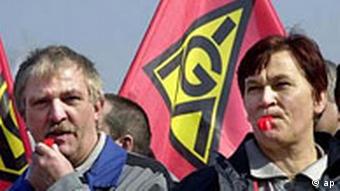 But the worst part about this campaign is that the basic problems -- for instance, what do we do if it turns out that the former East Germany can not be turned into something new? If we have to assume that of the 14 million people who live in the former East Germany, half of them will disappear in the next 15 to 20 years, simply because the young people continue to move away, leaving only an aging population? What do we do with that entire part of the country? What do we do with the demographic situation?

The problems facing the country are enormous, and that was not addressed. This was referred to as an election in which our fate was being determined, but no one really talked about what that might mean.

Are you curious about what will happen next?

Yes, very much so. But also apprehensive, because I think it's taking too long for people to accept reality. We should have been taking action for the past 20 years. The Kohl administration wasn't very good about being willing to make reforms, either. And then with unification, the government lost all sense of the consequences of huge public debt. No, it really is a situation that is cause for concern. 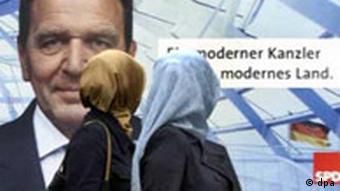 And we are still very far removed from dealing with the challenges as a nation. With the concentration on the economic and social issues, it's been possible to disguise the fact that, in my opinion, we have to get people to say that we Germans as a whole can't afford to trail behind the rest of Europe in this way. For the good of Europe, but also for the good of our own future, we must become braver and more hopeful. And preserve our society. That has been missing entirely.

I hope that in the future, that will be redressed, that we start appealing to people's sense of community, their hopes for the future and sense of responsibility - since we are finding it so difficult to solve the economic and social problems.

We need to encourage people to say, we've successfully mastered many great crises in our history - we can't simply fall apart in the face of a relatively minor crisis. That's simply undignified. I think that attitude needs to spread.

Christian Union leader Angela Merkel said Friday that talks with Greens leaders about a possible coalition failed. That means a grand coalition between conservatives and Social Democrats is most likely. (Sept. 23, 2005)

Finding the Will to Compromise in Germany

DW-WORLD's dossier on the unbridgeable differences and the potential for common ground between the different parties.

In light of the conservatives' poor showing in German elections, many observers have been skeptical about conservative party leader Angela Merkel's future. But she could still become chancellor, says DW's Ute Thofern. (Sept. 24, 2005)