The Demonized Face of G8 Protests

Violent anarchists have been dominating the headlines when it comes to G8 protests. Known as the Black Bloc, they see themselves as the ultimate opposition. Other demonstrators blame them for causing new problems. 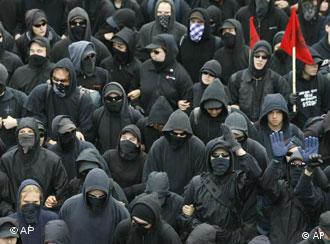 The Black Bloc during Saturday's demonstration in Rostock

They are the demonized face of the G8 protests, the violent anarchists who are dominating the headlines and shoving the many thousands of peaceful demonstrators to the margins of the media coverage. They are known collectively as the Black Bloc and their attendance en masse at the protests this week has been met with trepidation among many who march beside them and those watching for the sidelines.

The description of the Black Bloc in the recent reports of violence in Rostock and its surrounding areas insinuates that this is an international organization hell bent on vandalism and property destruction in the name of some anti-capitalist agenda. It gives the Black Bloc a greater air of threat to think of it as one malevolent force, an anarchist army under the control of a few powerful autonomists. 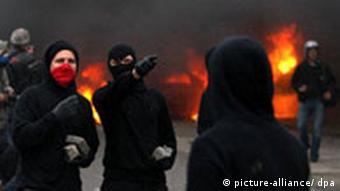 In fact, the Black Bloc is a cover-all title for protestors from many different groups with a myriad of aims and tactics who normally join together in an affinity group to carry out one shared aim at a protest. While those involved in a black bloc within a larger demonstration may have come together to carry out one common act or tactic, the beliefs the individuals hold within that bloc can be quite diverse.

"A new world order can only be created through violent struggle," a black blocker who gave his name as Ernesto told DW-WORLD.DE. "We have seen how ineffective peaceful mass protests have been. Millions took to the streets to try and stop the invasion of Iraq and yet the corrupt world powers still wage their war. Fighting for change is the only way -- otherwise we face a future of blind subservience, slavery and control."

Some fifty yards further into the roped off area of the Rostock Fischereihafen camp where black is the color de jour, a young Danish woman known only as Lena described her own motivation in slightly different terms.

"It is a social justice movement which wants to take the power back…to give it back to the people," she said. "The G8 is nothing more than an organized crime family; the faces may change but the objectives stay the same -- money and power. We are taking the roll of citizen police because these people are criminals and have the real cops in their pockets.

"Through direct action we intend to expose these criminals for what they are and lift the blinkers from the eyes of the masses." 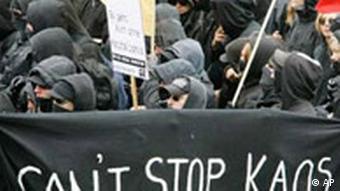 Dressing, but not thinking alike?

"Did you see the bloc on Saturday?" asked Martin X, a black blocker from Berlin. "Before the rocks were thrown, the power was with that congregation of people. The message was the people themselves.

"That black mass stood for solidarity, a revolutionary presence, a visible manifestation of our politics," he added. "When direct action is aimed at symbolic targets such as the buildings of multinationals and globalized franchises, I can condone that as a symbolic gesture but for me, the sight of the bloc moving as one is more powerful than the image of a burning car."

The diversity within the one perceived Black Bloc is not only ignored by some sectors of the media but is unknown to many of the peaceful, more colorful protestors who march beside the black-clad army. Some tar every demonstrator with the same brush. 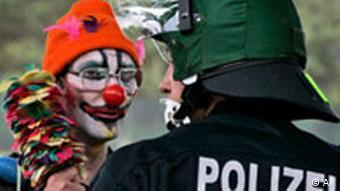 A different approach to dressing for protest

"For me there is no justification for the throwing of stones and the fighting of the police," said Andi Friedrich, a protestor from Berlin on the march to Rostock's Laage military airport. "It achieves nothing more than to turn the story of a thousand peaceful protestors into the story of a few violent idiots."

"You know some have their reasons and that their politics lead them to believe that to fight is the only way to achieve their ends," said Carla, Andi's companion. "But we have seen what it achieves in reality. We have seen increased police brutality on innocent people caught up in the chaos; we have seen tougher restrictions, we have seen the hardening of politicians towards the real issues.

"And these again are things we should protest about, but it makes no sense when you consider these new problems have been caused by those who march alongside you for peace and justice."

G8 leaders kicked off this year's much-anticipated summit at a dinner in a baroque palace, but the beauty of the surroundings was marred by a heavy mood on climate accords and testy Russia-US relations. (06.06.2007)

Police Prevent Protests as G8 Summit Gets Going in Germany

As G8 leaders arrived in northern Germany Wednesday for their annual summit, German police imposed strict limits on protestors, effectively preventing most to get anywhere near the airport. (06.06.2007)

G8 Summit: It's Foolish to Oppose it

The demonstrators at the G8 summit in Heiligendamm blame that group of nations for many of the world's inequities. But DW's Henrik Böhme says their view is one-sided, myopic and unfair. (06.06.2007)