The birth of two states: the Oaths of Strasbourg - 842

It was a freezing cold day when the armies of Louis the German and his half-brother Charles the Bald approached Strasbourg. The kings of East and West Francia swore the Oaths of Strasbourg. 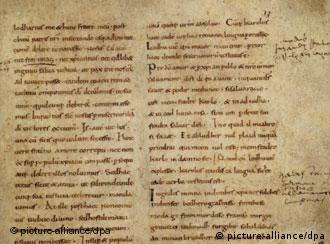 The documents of the Oaths of Strasbourg

With the death of Charlemagne on January 28, 814, the Frankish kingdoms were plunged into uncertainty. His grandsons were competing for the right of succession. Part of the problem was the role which Louis the Pious (778 - 840) - Charlemagne's son - had planned for his son, Lothar I (795 - 855). In 817, Lothar had been crowned coemperor, while Louis the German (806 - 876) and Charles the Bald (823 - 877) were intended to rule East and West Francia. The arrangement turned into something of a permanent feud between changing coalitions.

Basis for France and Germany

In order to end the brotherly dispute and simultaneously form a coalition against Lothar, Louis and Charles brought their armies to Strasbourg on February 14, 842 for a meeting. The oaths which they swore on the town's marketplace didn't just mark a turnaround in the dispute over the Carolingian succession; they also became a milestone in European history. They were the first documents that showed that the people of East and West Francia no longer shared a common language. 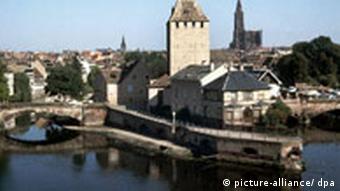 Both kings made the same preamble speech, which was a detailed complaint about why their brother Lothar was unsuited to the office of emperor. His alleged thirst for conflict was driving a wedge among the people of the Frankish kingdoms - a situation that was untenable. The kings went on to say that they had come to pledge an allegiance to each other that would bind them together in opposition to Lothar. Louis the German swore his oath in the "romana lingua," the precursor to the French language. Charles the Bald spoke his oath in the "teudisca lingua," which would later develop into the German language. Thus, each king swore the oath in the dialect of the other, so that the other's soldiers would understand what was being said.

This linguistic development was recorded in the historical documents of February 14, 842. In the years that followed, further treaties would be agreed which would seal the division of central Europe, giving the continent a shape which is still recognizable today. In the Treaty of Verdun in 843, Louis the German was made ruler of East Francia, with a western border that more or less followed the flow of the Rhine river, a southern border that formed a line from Geneva to Chur in Switzerland, and an eastern border that ended at Regensburg, Magdeburg and Hamburg. Central Europe was left in the hands of Emperor Lothar I, encompassing the Low Countries, Lorraine, Alsace, Burgundy, Provence and the Kingdom of Italy. Charles the Bald was given the western portion of the realm, with borders that more or less are the same as France's borders today. 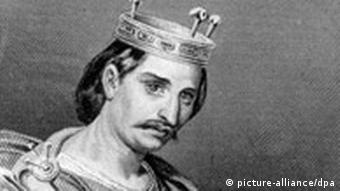 The Treaty of Meerssen in 870 replaced the Treaty of Verdun and divided the northern part of Middle Francia (today's Benelux states and the territory stretching to what was then Burgundy) between East and West Francia. After his death, Lothar's kingdom was divided among his three sons: the eldest, Louis II, received Italy and the title of Emperor, the second, Lothar II, received Lotharingia, and the youngest, Charles, received Provence. The final borders between modern-day France and Germany were decided in 880 in the Treaty of Ribemont.

The Franco-German partnership, which today is so often described as the motor driving European development, has its roots in the early 9th century, when an empire was divided into two realms that each developed into independent countries over the centuries that followed.