Thailand has been deeply divided ever since Thaksin Shinawatra was ousted by a military coup in September 2006. From self-imposed exile, he is working hard behind the scenes to get the Pheu Thai Party elected on Sunday. 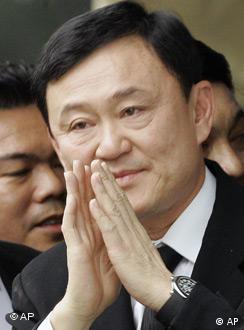 Thaksin Shinawatra was prime minister from 2001 to 2006

Thaksin Shinawatra lives in Dubai. Removed from power in 2006 when he was out of the country, he came back briefly to Thailand to face corruption charges and left again when he was sentenced to two years' imprisonment for abuse of office – he says he is in no hurry to return.

"Reconciliation is the priority," he insists. "Not amnesty - this may be a part of it but not everything. Bringing unity back to the country comes first. I just want things to move forward and see the country united." 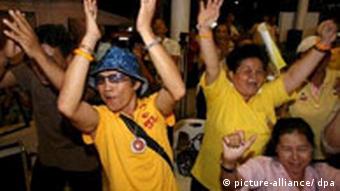 The former telecommunications mogul and billionaire splits opinion in Thailand. If he were to return, there would be delight among his largely rural and urban poor supporters. But his return and a refusal to purge his sentence would trigger widespread anger and perhaps even violence among his enemies, who stem from the country’s elites.

He is very open about his role and influence on the Pheu Thai Party, which is a reincarnation of his Thai Rak Thai party: "I have interfered in terms of ideas and thinking because I have more experience than others. I want to see them succeed and so I share my experience as former prime minister and of running around the whole world."

"Thaksin thinks, Pheu Tai acts" is the slogan the party came up with and it seems to have worked with the support base in Thailand's rural north, where the populist politician is especially popular because of his reforms when in office.

Although he thinks he might have been a bit tough in the past, especially with his campaign against drugs, he says he has changed his attitude somewhat since he was in power. "In politics, you have to use both the iron fist and a velvet glove, but nowadays you have to use more of the latter." 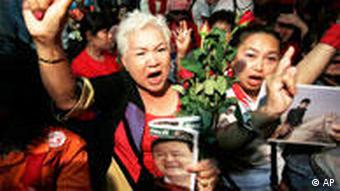 The 'Red Shirts' are hoping for Thaksin's return

Just as the Pheu Thai Party’s main candidate in the upcoming polls, his sister Yingluck, has done repeatedly, he rejects the accusation that she is just a puppet for him, although he admits there is much common ground. "She is my youngest sister; she worked for me from the beginning so I taught and trained her. So her working style is exactly like mine."