Thailand imposes state of emergency, no immediate plans to use force on protesters | News | DW | 21.01.2014

Thailand imposes state of emergency, no immediate plans to use force on protesters

Thailand has imposed a state of emergency in Bangkok and surrounding areas in a bid to get to grips with mass anti-government demonstrations. So far, though, there are no plans to use force to break up the protests. 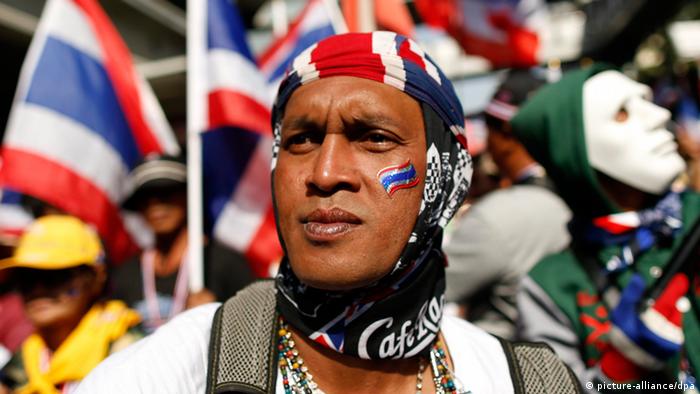 Deputy Prime Minister Surapong Tovichakchaikul told reporters in Bangkok on Tuesday that the state of emergency would come into force on Wednesday and remain in effect for the following 60 days.

"The cabinet decided to invoke the emergency decree to take care of the situation and to enforce the law," Surapong said.

Under the state of emergency, security forces will have additional tools at their disposal, including the power to detain suspects without charge, declare specific areas off-limits, or censor media outlets.

The announcement comes after more than two months of protests aimed at convincing Prime Minister Yingluck Shinawatra to step down. The demonstrations have paralyzed parts of Bangkok and there have been a number of outbreaks of violence, including shootings and grenade attacks.

Labor Minister Chalerm Yoobamrung, who also attended the nationally televised news conference announcing the measure, said the move was necessary to keep the situation in check.

"We need it because the protesters have closed government buildings, banks and escalated the situation, which has caused injuries and deaths. The government sees the need to announce the emergency decree to keep the situation under control," he said.

However, he also said the government had no immediate plans to use force to break up the demonstrations.

"We will not use force. We have no policy to disperse them and we haven't announced a curfew yet," Chalerm said.

The protesters have continued to demonstrate despite the fact that Yingluck has called snap elections for February 2. Instead, the opposition is demanding that an unelected council be formed to draw up political reforms.

Thailand's latest unrest was sparked by an attempt by Yingluck's government to pass an amnesty law, which would have paved the way for her brother, former Prime Minister Thaksin Shinawatra to returnt to Thailand. Thaksin, who was ousted in a military coup in 2006, fled the country two years later to avoid serving jail time for a corruption conviction.