Troops are patrolling the streets of the Thai capital, Bangkok, after the army declared nationwide martial law. Media broadcasts have been suspended, but the military denies that their move is a coup. 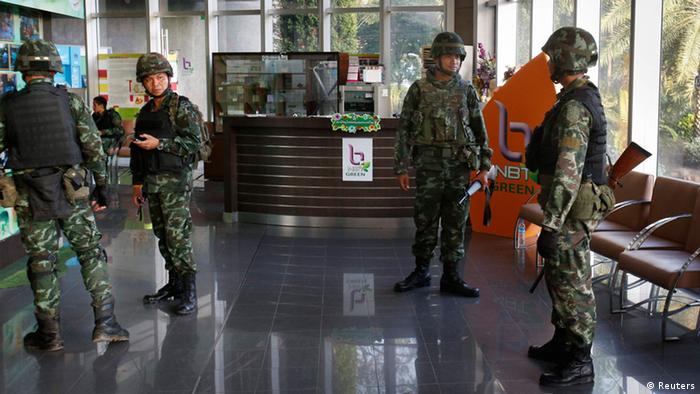 The Thai army has shut down 10 satellite TV stations and ordered all media to refrain from presenting news that could cause political unrest following its declaration of martial law earlier on Tuesday.

The army-controlled Peace-Keeping Command (PKC) said the order was given to "preserve peace and order."

Troops were positioned at TV stations to enforce the order. Armed soldiers and army vehicles have also been seen in the streets of Bangkok in the capital's retail and hotel district.

The army's surprise declaration of martial law, issued at about 3 a.m. on Tuesday (Monday 2000 UTC), came after months of sometimes violent anti-government protests that have claimed the lives of nearly 30 people since November last year.

"There are some groups with bad intentions to create unrest, and threatening to use weapons on the people," Thai army chief General Prayuth Chan-ocha said.

"I'm asking all those activist groups to stop all activities and cooperate with us in seeking a way out of this crisis," he added.

Prayuth however denied that the army was carrying out a coup.

The government under caretaker Prime Minister Niwatthamrong Boonsongphaisan says it welcomes the move to restore order, despite not being informed in advance.

An aid to Niwatthamrong said he had summoned a government meeting at an undisclosed location to discuss the situation.

Thailand's military has staged numerous coups since the country became a constitutional monarchy in 1932. The last one, in 2006, was to oust Thaksin, who has lived abroad since 2008 but who is still said to wield enormous political influence.

Thailand has been in political limbo since Prime Minister Yingluck Shinawatra, Thaksin's younger sister, and nine of her ministers were dismissed on May 7 after being found guilty of abuse of power.

Their dismissal was preceded by months of unrest as anti-government protesters called for an unelected "neutral" prime minister to be appointed to oversee electoral reforms ending Thaksin's influence.

Thai prime minister found not guilty of conflict of interest 02.12.2020

Thai Prime Minister Prayuth Chan-ocha had been accused of conflict of interest because he continued to live in a military residence after retiring as army chief. A court has cleared him, allowing him to keep his job.