Terror Suspect Says German Train Bombs Were a Hoax | Germany | News and in-depth reporting from Berlin and beyond | DW | 13.11.2008

Two time-bombs left on German trains in 2006 were just a hoax to stir up fear, says the Lebanese defendant and his lawyer. 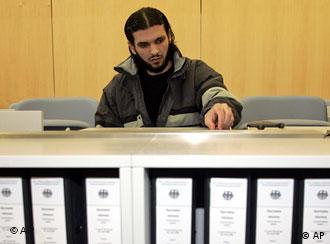 Defense lawyers asked a German court Wednesday, Nov. 12, to acquit a Lebanese student who planted a suitcase with a bomb mechanism inside it on a passenger train.

Summing up their case, they said Youssef Mohamad E.H., 24, was hoaxing when he left the device on a train on July 31, 2006 and fled the country. He had just wanted someone to open the suitcase and get a fright.

Police had told the trial, which has lasted all year, that the detonators of the two time-bombs exploded, but the gas charges had been wrongly mixed and they failed to explode.

Another Lebanese has already been convicted in Beirut of planting the other bomb.

Question of intent to kill

Prosecutors last month called for E.H. to be jailed for life, saying the scare was Germany's closest shave ever with an Islamist terrorist attack. Both men had been upset at cartoons critical of the Prophet Mohammed.

The defendant is to address the court on Tuesday next week and a verdict on the charge of multiple attempted murder is due from the court in Dusseldorf on Nov. 26.

Defense lawyer Bernd Rosenkranz said the accused could not be convicted if he had not intended to kill.

E.H. had helped build the bombs but the two defendants had changed their minds, realizing it was wrong to kill innocent civilians, and had deliberately loaded them with a gas mixture they knew could not explode.

The lawyer contended German federal police had exaggerated the case to back Berlin's view that Germany was in danger of attack from Islamist radicals.

Lawyer: confession must have been forced

He contended that the other plotter, Jihad Hamad, might have confessed as a result of a beating or threats. 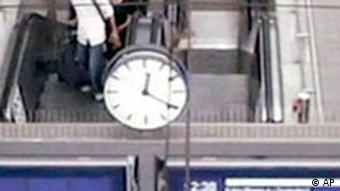 The accused were identified with the help of surveillance cameras

He said it was implausible to claim that Hamad turned himself in and confessed of his own volition to attempted murder.

"Contritely admitting to something is not the Arab way," the lawyer said. "It could only have been forced."

Rosenkranz said the two young men would also have thoroughly cleaned away any evidence from the Cologne apartment where they built the bombs if they had truly intended to kill people.

But they left everything strewn about, including sales dockets for the gas canisters they had used.

"They just wanted to show the German public what they were capable of after the Mohammed cartoons were published in Germany daily newspapers," Rosenkranz said.

Another defense lawyer said Hamad, the other conspirator, had retracted the confession that led to his 12-year jail term in Lebanon and agreed that the attack had been a hoax.

The lawyer, who met with Hamad in jail, quoted him as saying it was "obvious the bombs were not meant to explode."

Claims of mistreatment while in custody

Hamad claimed he was beaten in custody and a Lebanese prosecutor had personally threatened to have him tortured. He had also been told his family would be summoned to see authorities if he told German investigators anything about being hit or threatened.

According to the lawyer, Hamad said he and E.H. had been made "scapegoats in a German theatre show" which was "being performed as a favor to the Americans."

But a German federal prosecutor in court responded Wednesday that it was "an interview with an evidential value of just about zero."

The two men were filmed by closed-circuit TV at Cologne station as they carried suitcases with the time-bombs inside aboard trains going in opposite directions.

Lost-property staff discovered the two unexploded bombs. E.H. was arrested when he returned to Germany, where he had been preparing for university studies in Kiel.

German police said they've discovered a video by a German convert to radical Islamism saying he's ready to wage jihad in Afghanistan. How typical -- and how threatening -- are converts like Eric Breininger? (22.10.2008)

Politicians in Germany warned Saturday of the dangers posed by Islamists, following the arrest of two terrorist suspects and a police search for two others. (27.09.2008)

A Lebanese man accused of attempting to blow up two German trains said Thursday he never intended to kill anyone. The 23-year-old told a court he opposed the use of violence against citizens. (08.02.2008)