Tens of thousands of Israelis take part in anti-Netanyahu rally

Protestors have flooded into the center of Tel Aviv to voice their unhappiness with the current government of Prime Minister Benjamin Netanyahu, currently tied with the center-left Zionist Union ahead of a general vote. 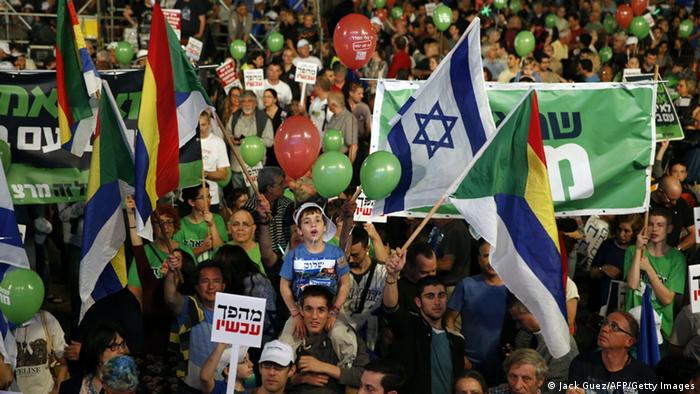 Around 25,000 Israelis rallied against Prime Minister Benjamin Netanyahu on Saturday in Tel Aviv, 10 days ahead of the country's general election, to call for "change."

The protest was orchestrated by the group Million Hands, a grassroots organization dedicated to a peaceful resolution of the conflict between Israel and Palestine and the creation of a Palestinian state. The demonstrators gathered in Tel Aviv's Yitzhak Rabin Square, named after the first native-born premier of Israel and Nobel Peace laureate, who was assassinated in the square at a peace rally in 1995.

"This is a demonstration by Israeli citizens who are demanding a change of politics, a peace agreement," said one of the organizers, Dror Ben Ami, speaking with French news agency AFP.

"The current government has failed on the social and economic fronts and has not improved the security situation, the country has broken down…We hope that the left will return," Ben Ami said.

The demonstration was one of the largest anti-Netanyahu protests to be held in the run-up to the March 17 election and shows the growing discontent with right-wing leadership. Netanyahu's Likud party is neck and neck with the center-left Zionist Union in opinion polls.

The current government has remained staunchly opposed to the creation of a Palestinian state.

Meir Dagan, former head of the Israeli spy agency Mossad, delivered a fiery speech against the prime minister to the crowd of thousands.

"Israel has enemies but I do not fear them. What scares me is the current leadership of the country," Dagan said to wild applause. "Bibi go home!" the crowd shouted back, calling Netanyahu by his nickname.

Israeli Prime Minister Benjamin Netanyahu said he had offered "a practical alternative" to a planned nuclear deal with Iran in his speech to Congress. The US president had earlier said it contained "nothing new." (04.03.2015)

'Israel is a very divided society'

Israel's upcoming parliamentary election is, in part, a referendum on the country's self-image, with far-reaching consequences for domestic and foreign policy, says Kerstin Müller of the Heinrich Böll Foundation. (02.03.2015)

Netanyahu's problems at home and abroad

Israel's elections are a month away with Likud and Labor running head to head. A report on Benjamin Netanyahu's expenses could prove embarrassing to the prime minister, writes Tania Krämer from Jerusalem. (17.02.2015)