Tens of thousands of Germans take to the streets in anti-nuclear protest | Germany | News and in-depth reporting from Berlin and beyond | DW | 13.03.2011 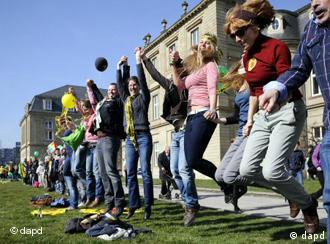 Chancellor Angela Merkel's government has come under fire for extending the lifespans of Germany's nuclear power stations, in the aftermath of the scare that followed an explosion at the Fukushima power plant in Japan.

Merkel said Germany's nuclear plants are safe but the government is watching Japan's accident closely to see if lessons can be learned.

The chancellor was speaking after meeting senior cabinet ministers and nuclear experts in light of fears of a meltdown at an earthquake-crippled Fukushima.

"We know how safe our plants are and that we do not face a threat from such a serious earthquake or violent tidal wave," she told reporters at a news conference.

"But we will learn what we can from the events in Japan, and in the coming days and weeks will follow closely what the analysis yields," she added. 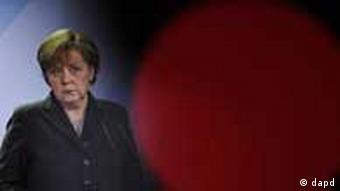 Over 40,000 protesters in southern Germany formed a 45-kilometer (28-mile) human chain from the Neckarwestheim nuclear plant to the nearby city of Stuttgart, demonstrating against plans that extended the life of Germany's nuclear power stations.

The protest was planned long before Friday's earthquake resulted in an explosion at Japan's Fukushima I nuclear power plant. However, protest organizers said the turnout was probably boosted by fears of a meltdown in Japan.

The demo, spearheaded by Germany's Green party and Social Democratic Party (SPD), is a reaction to the government's plan to keep the country's 17 nuclear power plants open on average of 12 years longer. A previous government, under former Chancellor Gerhard Schröder, had decided a decade ago to phase them all out by 2021.

The incidents in Japan have brought the topic of atomic power back to the fore of German political debate, as four German states gear up for elections later this month.

In a joint statement, Green party leaders Claudia Roth and Cem Özdemir said the possible meltdown in Japan demonstrated "that nuclear power is an uncontrollable, highly dangerous technology, even in a high-tech country like Japan that is equipped to handle all possibilities."

Özdemir told the Welt am Sonntag newspaper he expected Merkel to invite party leaders to an "emergency summit on atomic safety."

'No time for politics' 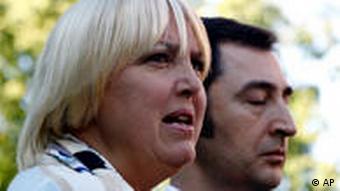 German Environment Minister Norbert Röttgen, a member of Merkel's conservative Christian Democrats, said Germany's nuclear safety systems would have to be analysed in the light of the Japanese incident.

"This happened in a country with very high safety standards. That is why we are taking it extremely seriously," he told broadcaster WDR2. "We have to find out and analyse how it could have come to this. The fundamental question of whether we can guard against all dangers is now open again, and we will address that question."

"When over 10,000 people in Japan have died, Germany's first reaction cannot be interparty debate because we have state elections," he said. 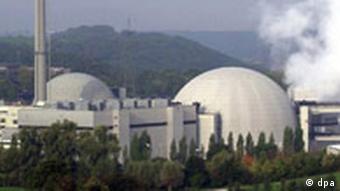 Neckarwestheim is home to one of Germany's 17 power plants

"We may now be witnessing an accident that shows us how critical the whole situation is, how uncontrollable such a power plant is," she said. "We cannot master nature, nature rules us."

According to surveys, the majority of Germans have been consistently against nuclear power for years, largely due to the memory of the 1986 Chernobyl disaster, during which radioactive rain fell on parts of southern Germany.

Opposition parties from five Germans states are taking the national government to court over plans to extend the lifespan of Germany's 17 nuclear power plants, insisting that their approval is required. (28.02.2011)

Germany's nuclear shutdown is likely to be delayed, due to concerns about power supplies this winter. It's been over a decade since Germany decided to abandon atomic power. But energy shortages, caused by Russia's war on Ukraine, have forced a rethink.