Tapping into a new source of protein | Science| In-depth reporting on science and technology | DW | 23.02.2015

Tapping into a new source of protein

German scientists have developed a new method of extracting high-level protein from lupines. This low-maintenance plant has the potential to compete with soy one day. It's also suitable for improving soil quality.

Lupins as a Meat Substitute

The world's population has reached 7.2 billion, and the United Nations estimates that figure to pass the 10 billion mark by next century.

That's a lot of mouths to feed.

And scientists say a healthy diet includes protein. For the most part, people get their protein from milk, meat or eggs. But if more plants like soybeans were utilized, it could reduce our demand for agricultural land by 80 percent.

But it may not only be down to soybeans. 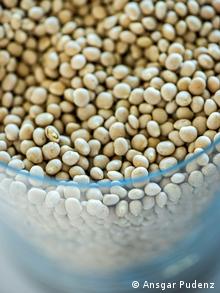 Lupins are legumes. Their seeds are similar to those of beans

From trial to production

Stephanie Mittermaier and her colleague Peter Eisner, who work at the Fraunhofer Institute for Process Engineering and Packaging near Munich, developed a process that turns lupine seeds into a protein-rich, neutral-flavored powder.

"Lupine seeds are comparable to peas or soy," Mittermaier explains. "In this process, we first want to separate the seeds from the shells."

After peeling, the seeds are mashed into flakes - similarly to oatmeal. After that step, Mittermaier sought to remove unwanted flavors from the flakes. Lupines have a strong smell, and taste like beans or grass.

No oil or unwanted flavors 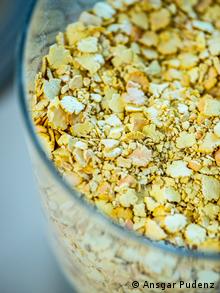 Before de-oiling with supercritical CO2, the Lupin flakes taste like grass

"Twenty-five of them are very, very strong - they were still detectable as heavily diluted," she says. These stem from various chemical classes, including carbonic acid, aldehydes, alcohols, ketones and more, Mittermaier says.

The researchers managed to extract the oil - which contains most of the flavors - from the yellow lupine flakes. And the flakes became white as snow.

Protein for milk, fiber for flour

Next, the flakes go into a watery solution.

Mittermaier's colleague Peter Eisner points to a steel device holding the mix: "We use this machine to separate the plant proteins from the solution in this last step."

Then, the sought-after protein is separated from the fiber. What remains is a curd-like product which, when dried, can be pounded into a powder. The pure lupine protein looks like milk powder or flour - and tastes more or less the same.

The by-products don't go to waste - the oil can be used in food, and the fibers can be mixed into the flour.

The Fraunhofer researchers have launched their product on the market. In the northeastern German state of Mecklenburg-Western Pomerania, the Fraunhofer offshoot Prolupin produces up to 300 tons of lupine protein per year - most of which is used in ice cream. 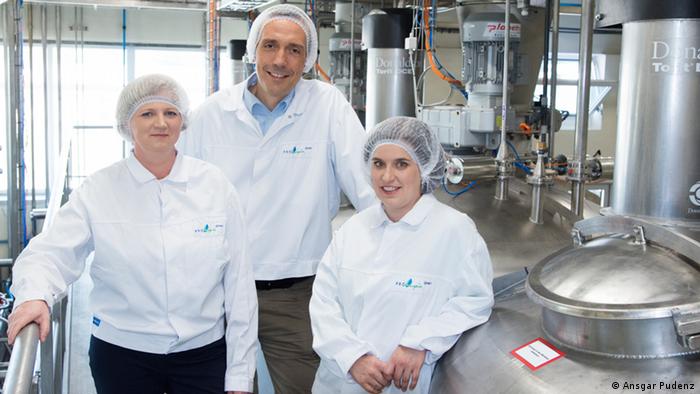 The researchers chose the location in northeastern Germany because of the sandy soil, where lupines grow well.

"Your production site should always be where the raw materials grow, so you don't have long transport routes," says Eisner, adding it's better for the environment. "That's why we're here up north. Growing conditions are perfect and the agricultural community here supports it, too."

Farmers are not only interested in lupines because they can produce protein, but also because lupines help enrich the soil with nitrogen and phosphorus. That's good for the rye fields in the region.

For cultivation, the Fraunhofer scientists went with a fungus-resistant strain of lupine that has few toxic components: the blue lupine. This humble flower could one day help in the fight against world hunger, they say. 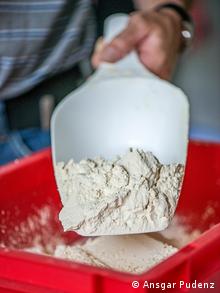 The protein tastes like a mixture of flour and milk powder

"The lupine is very low-maintenance," Eisner says. "That's its strength. It reaches maturity in only 100 days, so it can deal with long dry periods." They have had requests for advice on how to cultivate the blue lupine from all over the world.

The potential market could be huge - lupine proteins have two traits that other plant proteins based on beans, potatoes or soy don't: a neutral taste and an extraordinary ability to blend water and oil.

That is also the reason why Mittermaier, Eisner and their project partner and agro-engineer, Katrin Petersen, head of Prolupin, decided on ice cream as the first product.

"Ice cream contains only a few grams of protein in a serving, but it highlights the creamy and soft texture that can also be fluffy," Eisner explains. 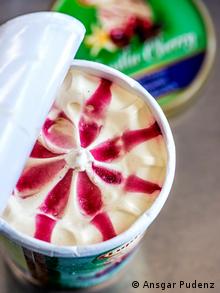 It's creamy: the scientists say it's great for ice cream

Their next step will be to expand their product selection to include other "dairy" products like lupine milk, yoghurt or pudding.

"Additionally, we want to add delicatessen items like mayonnaise, sauces and dressings, so the customer has an alternative to soy products," Eisner says. The lupine protein can even be used to make sausages.

Over the years to come, the inventors aim to introduce products to the small but growing market for vegans in Germany.

And they are convinced the lupine is capable of more. Milk, meat and eggs provide 80 million tons of protein worldwide - that's 400,000 times more than Prolupin currently gets from lupines. So there's plenty of room for the blue lupine to grow.

A fact that was recognized last year, when the team of scientists from Freising were awarded the German Future Prize 2014 by President Joachim Gauck in Berlin.

More on lupines in the new edition of Tomorrow Today

Lupins as a Meat Substitute