Estonia has extended the brand of its most famous company, Skype, with a new Internet video booth. The project's designers say they want to bring such booths to other airports, hotels and shopping malls around the world. 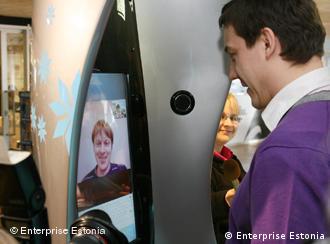 The video booth is already popular with travelers

Last Friday, a few Estonian companies launched the first Skype video booth at the Lennart Meri International Airport in the Estonian capital, Tallinn. The famous Estonian Internet phone company is hoping to extend its service beyond computers and mobile phones to dedicated physical devices as well.

Enterprise Estonia, which promotes Estonian companies abroad, and a local Estonian ad firm, AdTech, and another Estonian ad company, Brilliant, collaborated to build the booth. These three groups hope this booth will spread to many other airports and travel locations around the globe. To learn more, Deutsche Welle spoke with Merilin Pärli of Enterprise Estonia.

Deutsche Welle: So tell me a little bit about this Skype video booth that has been launched at the Tallinn airport. What is it exactly and when did it start?

Merilin Pärli: Well, we opened it exactly one week ago. And it is quite unique. It's the first one in the world. It's a Skype station, and you can take free video calls from there. Anybody who has a Skype account can use it. And of course if you have Skype credit, you can call regular numbers as well. As you probably know, Skype has more than 600 million users all over the world, and that's increasing day by day.

Skype was an idea that was developed in Estonia, and they now develop it in Estonia as well, although it has become quite international already. We still have one unit - the development unit - here in Tallinn. It was quite logical that the initial home of Skype would have a Skype station in Estonia at Tallinn airport, which is named after Lennart Meri, the former Estonian president, who urged people to find some useful innovation to put Estonia on a map. If Skype isn't that, then what is?

I was going to say, Skype has probably been the best branding for Estonia in its history.

Probably. And that is the reason that Enterprise Estonia decided to erect this station in the airport - as one Skype station says more than 1,000 words about Estonia. 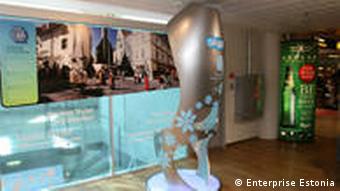 Can you describe what the booth looks like, and how you interact with it?

It looks like something from space. It's something very UFO-like. It has a futuristic look. When you step on the floor of the station, it changes the color, and that means you can log on, and to log off you just have to step out of the booth.

So there's a platform sensor?

Yes, yes. At first it's blue, and then it turns green when you step on it. When you step off, then you will be logged off.

Is it enclosed, like an old-style phone booth? Or is it open?

It's open, but it's very discreet, because you have a wall behind your back, so nobody can really walk through [behind you]. So it's absolutely safe to take your calls there.

Is it just a computer mounted into this little booth, or is it something else?

It's a screen, of 22 inches (56 centimeters), and there is the headset as well. But if you want you can use your own. When you want, you can log on, and dial your friend. If your friend also has a camera, then you can see your friend's face, and you can talk to your friend as in an ordinary video call.

You walk into this booth, and the platform changes color, and there's this big screen. Is it a touch screen?

Yes, it's a touch screen.

The interface is exactly the same as Skype has. But it was designed by a company called AdTech, a small Estonian company. They just used the software of Skype. It's a new development. As Skype Estonia has said, they are very welcoming to other companies using their technology and coming up with new technologies. That should be the natural way of doing innovation. And actually the guys behind this Skype station, they have the idea that this should go into mass production. So maybe in a year, hopefully, every airport will have its own Skype station. 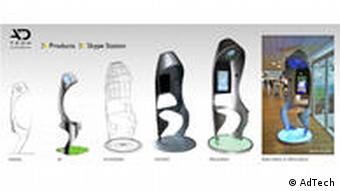 I was going to ask you, I was wondering - is this a one-off, a one-time thing, or if you have plans to expand it to other parts of the world - and it sounds like you do.

For Enterprise Estonia, it's a prototype we are in. But the rest of the world is ready for AdTech to develop. It's their plan and they want to get it into all airports, and hotels and shopping malls and so on. So this is already their project.

Are these Skype booths expensive to build?

The first one, of course, was definitely expensive. But for mass production, if they get enough orders, the price diminishes and they are also working out some new prototypes with some new looks. This is probably the premium brand. There will be some cheaper versions as well. If you want to buy this, the price they are selling it for right now is about 4,000 euros ($5,600).

That's not that much. I would have guessed more.

It's not that much. Everybody is welcome to purchase it, every hotel, every airport.

What has the response been like? I know it's very new. Have you seen people use this in an everyday situation? Are people lining up to use it?

They are using it, quite actively. And one of the issues is that it looks different and people are curious. But they are really using it to call and say, 'I'm off in 15 minutes.' It's kind of romantic as well, using a phone booth. The context in Estonia is that the last analog phone booth was taken off the streets, so the streets are empty of phone booths. You cannot find any.

You're talking about public pay phones.

Yes, the public pay phones - there are none left. This is the first booth in a year, but it's a completely new booth.

Silmet, one of Europe's largest refineries, looks to higher profits as China slashes its output of rare earth metals. These products are crucial in the manufacture of semiconductors, and in turn, consumer electronics. (22.03.2011)

Estonia is 'most integrated country north of Germany'

Skeptics have said Greece's debt crisis should have made Estonia rethink adopting the euro, but Estonian President Toomas Hendrik Ilves says it was a natural step in the country's European integration. (19.06.2010)