With the current set of peace accords designed to restore relations between Armenia and Turkey suspended, the US faces a struggle to reopen negotiations to end the long-standing conflict in the strategic South Caucasus. 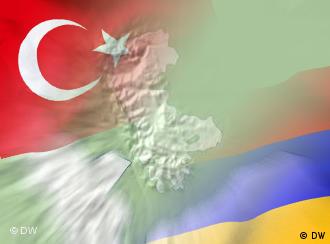 Turkey and Armenia are at an impasse over peace accords

Washington's efforts to bury a century of hostility between the neighbours were dealt a hefty blow this week when Armenia suspended ratification of the US-brokered peace accords which were signed in October 2009 to establish diplomatic relations and open their shared border.

With both sides seemingly unwilling to move on from nearly 100 years of deep mistrust, neither the government of Christian Armenia nor that of Muslim Turkey chose to ratify the agreement on Thursday amid claims of manipulation of the texts and the insertion of new unapproved conditions.

Despite the obvious benefits of the agreement - including huge economic gains for poor, landlocked Armenia and a boost to Turkey's EU credentials - both Armenia and Turkey have instead chosen to postpone further negotiations, with the on-going feud over the World War I mass killing of Armenians by Ottoman Turks and the disputed region of Nagorno-Karabakh at the heart of the dispute.

The decision to suspend the peace accords came just two days before the 95th anniversary of the killings on April 24th, again highlighting the importance of the 1915-1917 massacres of Armenians in the history of hostile relations between the two countries.

Armenian massacre at the heart of continuing animosity 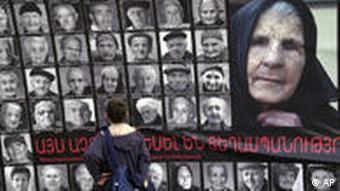 Armenia claims that the Ottoman Turks deported and executed 1.5 million of their kin during World War I and has been fighting for the massacre to be officially labelled genocide, a term the Turks reject. Armenian officials claim the peace accords were suspended because they betray Armenia's efforts to have the massacres internationally recognized as genocide.

Turkey says that 300,000 to 500,000 Armenians and at least as many Turks perished in fighting between the two peoples as the Ottoman Empire crumbled.

"Armenia has clearly stated that it wants Turkey to recognise the massacres as genocide as part of the rapprochement process," Dr. Stefan Meister, an expert on the South Caucasus at the German Council on Foreign Affairs, told Deutsche Welle.

"Turkey won't do this but has said that it wants a historical commission to investigate the massacres to find out what really happened. Armenia says that everyone knows the massacres are historical fact and is concerned that a commission will bring the nature of the event into question."

"The genocide in the Armenians is a well documented historical event," Prof. Dr. Mihran Dabag from the Institute for Diaspora and Genocide Research at the University of Bochum, told Deutsche Welle.

"Where there has been freedom to research, the researchers have unmistakably proved the authenticity of the genocide policy in the years1915/16. There has also been reassuring developments in this research from Turkish intellectuals and Turkish historians. Still, this is no substitute for official Turkish policy."

US President Barack Obama pledged in his election campaign that he would work toward getting the massacre recognised as genocide and Armenians are hoping that Obama will use a statement he intends to make on the anniversary to fulfil his promise.

However, with Turkey an increasingly important and geopolitically strategic NATO partner, it is unlikely that the US president will do this for fear of alienating Ankara.

The peace process is also unlikely to continue until a resolution to Armenia's conflict with Turkish ally and energy trading partner Azerbaijan over the breakaway Nagorny-Karabakh region is found. 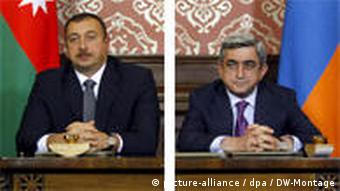 The leaders of Azerbaijan and Armenia are still at odds

Ankara and Yerevan have been at odds over Turkic-speaking Azerbaijan ever since 1993 when Turkey closed its border with Armenia in solidarity with Azerbaijan over the war in Nagorno-Karabakh, when ethnic Armenians backed by Armenia threw off Azeri rule after the collapse of the Soviet Union.

Nagorno-Karabakh has been under control of Armenian troops and ethnic Armenian forces since a 1994 cease-fire ended six years of war.

The border will remain closed, Turkey says, until ethnic Armenian forces pull back from Nagorno-Karabakh.

Turkish Prime Minister Tayyip Erdogan said this week that ratification of the peace accords would depend on Armenia reaching terms with Azerbaijan over Nagorno-Karabakh, a statement that caused uproar in Armenia.

"Armenia rejects Turkey's conditions over Nagorny-Karabakh as part of the rapprochement," said Meister. "They see the region as part of the former Armenian state and with almost 70 percent of Nagorny-Karabakh inhabited by ethnic Armenians; they want to protect their people there. Turkey wants the Armenians to leave and to help protect the very few Azerbaijanis who are still there. Rapprochement can only happen if the Armenians leave."

"The Armenians and Azerbaijanis signed a memorandum in Moscow in 2008 saying they would not go to war but they soon said afterwards that a war could still happen," he added. "The best solution would be a federal system where Nagorny-Karabakh has its own sovereignty within Azerbaijan but that is also unlikely to happen."

Rapprochement in the interests of the US 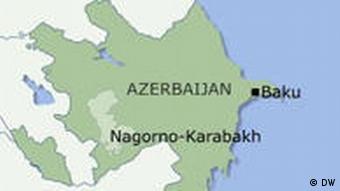 The Nagorno-Karabakh issue is also a problem for US strategy

Azerbaijan is a valued oil and gas exporter and one of the West's key hopes for gas for the planned Nabucco pipeline. It is said to be angry at Washington over US support for the potential deal between Armenia and Turkey to mend ties and reopen their border. Azerbaijan fears the deal will weaken its hand in talks over the rebel territory. The US, meanwhile, finds itself in a difficult situation where achieving its own goals relies on keeping all those involved on side.

"The region is very important to the US due to its proximity to Iraq, Iran and Afghanistan but also because of the Caspian Sea and its natural resources," said Meister.

"Rapprochement is in Washington's interests. If Turkey opens up the border with Armenia then this gives the US another route into the region and could allow gas and oil to flow without Russian interference. But there is a large Armenian and Azerbaijani Diaspora in the US and both are pressuring Washington for their own ends which, along with Turkey's needs, makes it very difficult for Obama."

Armenia puts deal to restore ties with Turkey on hold

Armenia has suspended a deal to end decades of hostility with its neighbor Turkey. It accuses Ankara of adding new conditions to the agreement that is intended to restore diplomatic relations and reopen border crossings. (22.04.2010)

Turkey warns of broken US ties after Armenian 'genocide' decision

Turkey has responded sharply to US lawmakers' decision to brand the killing of Armenians by Ottoman forces during World War I a 'genocide.' Ankara immediately recalled its US ambassador. (05.03.2010)

After a series of diplomatic talks, Azerbaijan's President Ilham Aliyev says he will pursue the military option against Armenia if a long-running border dispute is not resolved in Munich this week. (22.11.2009)