One of the world's most prominent business magazines has given the German economy the thumbs up. The positive review in "The Economist" has everyone surprised - except for the chancellor. 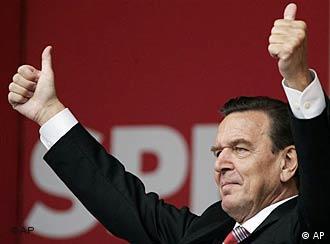 The chancellor likes what "The Economist" is writing

Great Britain's and maybe the world's most prominent business magazine is not known for its love affair with Germany's economic system.

The decidedly pro-business Economist has in recent years enjoyed ribbing Europe's largest economy for its stagnant growth rates, high unemployment and a union strength that has led to sky-high labor costs. All the more surprising, then, that when the German symbol, the black eagle, graced the front of this week's magazine as a caricature, it was flexing its muscles underneath the headline "Germany's surprising economy." 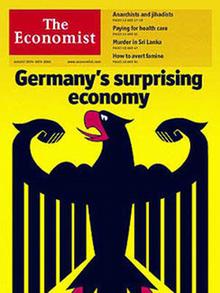 "Some forecasters are now predicting that Germany, which has for so many years disappointed on the downside, could be about to surprise on the upside," the magazine wrote in the lead editorial.

As reasons for this The Economist listed, above all, the turnaround accomplished by the country's major corporations. The newfound flexibility of Germany's usually stubborn unions has helped lower labor costs immensely and made the country more competitive than Italy, the Netherlands, Great Britain and France.

"That is a big reason why, last year, it regained its position as the world's biggest exporter," it wrote.

The magazine gave credit to Chancellor Gerhard Schröder's coalition government of Social Democrats and the Green party for getting reforms underway. His raft of labor and socio-economic reforms, called Agenda 2010, may lose him the election this September, but they have nonetheless "raised hopes that fresh impetus could set the economy on to its strongest track for years."

Tough measures, like the unpopular Hartz IV law that made it more difficult for Germany's 1.8 million long-term unemployed to receive benefits without actively looking for jobs, won the magazine's approval.

"Hartz IV ... has added 8 billion euros ($9.8 billion) to this year's government costs, but failed to create many new jobs," the magazine wrote. "It has, however, made employees more fearful of the consequences of losing their jobs. That has strengthened the hand of firms ... and weakened the power of trade unions." 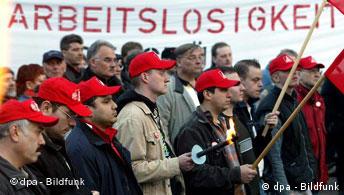 Germany's unions are getting weak, and that's a good thing, according to "The Economist"

The report raised eyebrows in Germany, getting press coverage not only from business magazines, but local papers as well. Germany's prominent Frankfurter Allgemeine Zeitung newspaper followed up on The Economist cover with a piece examining the euphoria.

"Nobody wants to believe it: Germany is gaining more prominence abroad as an investment destination," it wrote.

Nobody, that is, except for the chancellor. At one point during an hour-long interview on German public television yesterday evening, Schröder fished a piece of paper out of his pocket. It was the Economist's piece.

"The Economist, a publication that in the past was never particularly pro-German, has a cover story 'Economist cheers Germany's surprising economy' and says that thanks to the reforms we introduced our competitiveness has grown enormously," he said.

But Schröder neglected to mention one thing. Though it gave Schröder's government a small amount of praise for getting the reform process started, the Economist editorialists clearly hope his opponents will be the ones continuing them after the likely elections on Sept. 18.


"The commitment of the new government to further reforms will make a big difference," they wrote. "The politicians may not be able to control the economy, but they can certainly muck it up. A center-right government under Ms. Merkel would have the advantage that her party also controls the upper-house Bundesrat, making it far easier to push through legislative change."

German teenagers, particularly those leaving school to go directly into the workforce, are preparing themselves for the worst. A new nationwide study shows that youths have a "considerable fear" of the future. (Aug. 8, 2005)

Now that it looks like elections will take place in September, political parties can get down to the fundamentals of their campaigns, which will be dominated by two themes: unemployment and deficits. (July 24, 2005)

Heading Toward a Grand Coalition?

Much to the annoyance of their partners in government the Greens, Germany's Social Democrats have begun discussing the possibility of a grand coalition with the conservative opposition. (Aug. 8, 2005)