Study: The oldest pre-human could originate from Europe, not Africa | Science | In-depth reporting on science and technology | DW | 27.05.2017

Study: The oldest pre-human could originate from Europe, not Africa

Humans and great apes parted ways in Africa with the development of the first pre-humans, many experts believe. But there might be a completely different explanation: Are the Balkans the cradle of humanity? 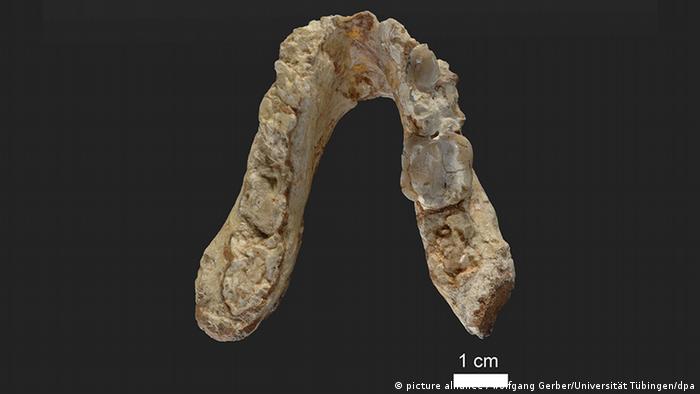 The lines of descent of today's chimpanzees and humans may have split in Europe and not - as is often believed - in Africa, according to researchers at a German university.

What is more, this evolutionary step may have occurred a few hundred thousand years earlier than previously assumed, the researchers say.

The revolutionary theory was presented in the periodical "PLOS One" by a team of researchers led by Madelaine Böhme at the Tübingen-based Senckenberg Centre for Human Evolution and Paleoenvironment (HEP).

The team headed by Böhme examined the only two existing specimens of the "Graecopithecus freybergi" hominid, nicknamed "El Graeco" by researchers. 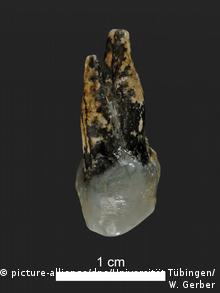 This tooth of the "Graecopithecus freybergi" was discovered in Bulgaria

The hominid species includes humans and their fossil ancestors as well as some of the great apes. The specimens concerned are a lower jaw found in Greece (above photo) and a tooth discovered in Bulgaria.

After detailed analyses, the research team concluded that Graecopithecus was a pre-human species hitherto unknown. For example, the dental roots were, for the most part, fused - a feature that is characteristic of humans and their extinct relatives. Great apes usually have separate dental roots.

"We were surprised by our results, as pre-humans were previously known only from sub-Saharan Africa," said Jochen Fuss, one of the researchers involved in the study.

After analyzing the sediments from which the fossils had been retrieved, the research team dated the lower jaw to 7.175 million years and the tooth to 7.24 million years ago. That makes the two specimens older than than the hitherto oldest known pre-human from Africa,  Sahelanthropus, which is dated to about 6 to 7 million years ago.

The researchers have thus now concluded that the pre-human lineage split from chimpanzees may have occurred earlier, and not in Africa, but in the eastern Mediterranean region. 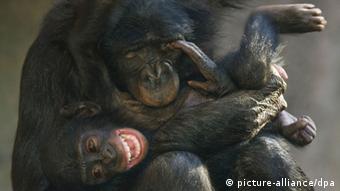 At some time, humans and chimpanzees parted ways

The "East Side Story," according to which pre-humans originated in Africa, was now called into question by the European "North Side Story," said Böhme during the presentation of the study's findings in Tübingen. "I now expect frantic reactions, I expect a lot of dissent," she said.

She intends to corroborate her theory, including with analyses of "El Graeco's" nourishment. In addition, she plans to look for further clues pointing to the evolution of pre-humans beyond Africa - in Iran, Iraq and, possibly, Lebanon.

"The split of humankind's hominid ancestors from the great apes is badly documented," says Jean-Jacques Hublin, head of the Human Evolution department at the Leipzig-based Max-Planck-Institute for Evolutionary Anthropology, who is not involved with the study.

"This is not the first time that researchers have suggested the occurrence (of those ancestors) in southern Europe's extensive fossil record."

The research team led by Böhme has concluded that dramatic environmental changes triggered the lineage split. For a start, in the sediments at the fossil sites they found red, fine-grained silts that are a characteristic feature of desert dust. They believe that they originate from northern Africa.

Secondly, they found a high concentration of different salts. "For the first time, this data could provide evidence of a Sahara that expanded 7.2 million years ago and whose desert storms blew red, saline dusts up to the north coast of the then-Mediterranean," explained Böhme.

In Europe, too, climate changes had turned the landscape into an open savannah, the researchers surmise. They found traces of characteristic plants in the sediments, as well as indications of periodical fires.

"Taking everything into account, we can assemble the picture of a savannah. The fact that ancestors of today's giraffes, gazelles, antelopes and rhinos were found along with the Graecopithecus fossils supports that idea," explains the study's co-author, Nikolai Spassov, of the Bulgarian Academy of Sciences.

What the pre-humans looked like, and whether they already walked upright, was not known, said Böhme.

Judging from the jaw's size, the conclusion could be drawn that El Graeco weighed around 40 kilograms and had the size of a female chimpanzee of today, she said.

Is Lucy humanity's real mother? Or is it Australopithecus deyiremeda?

Lucy has been regarded as the likely "mother of mankind" for decades, but scientists now say she might be something more like an aunt to modern humans. Our maternal respects could be owed to a newly found set of bones. (28.05.2015)