About 150,000 penguins have perished in Antarctica after a huge iceberg cut off their access to the sea, forcing them to trek dozens of kilometers to find food. Scientists warn the birds could be gone within 20 years. 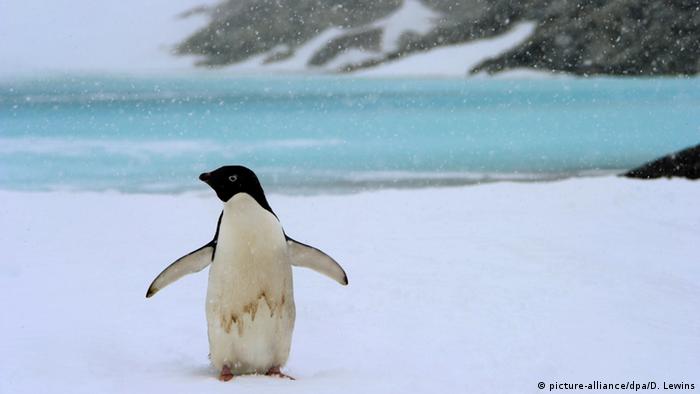 Desolate Cape Denison in eastern Antarctica used to be home to a colony of tens of thousands of Adelie penguins. They lived just a short waddle from the sea - their food supply - and thrived. Unrelenting winds blowing floating ice offshore meant that there was always a section of open water where the birds could feed.

But that changed drastically with the arrival of an iceberg the size of Luxembourg. The hefty mountain of ice, known as B09B, grounded near the penguins' Cape Denison colony in Commonwealth Bay at the end of 2010. Since then, it has packed the floating sea ice ever more tightly against the coast, closing gaps of open water where the penguins used to forage for krill.

Using satellite images, a team of researchers from Australia and New Zealand has discovered that penguins seeking food now have to trek over 60 kilometers (35 miles) of ice surface to get to the sea. It's a lengthy commute for such small penguins, and the strain has taken its toll on the population. 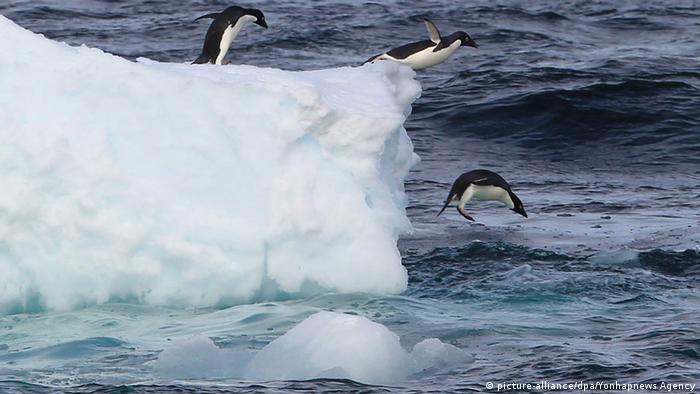 Adelie penguins typically rely on being close to the sea's edge, where they can easily find food

Since 2011, the Adelie population at Cape Denison has shrunk from 160,000 to just 10,000, the scientists wrote in their paper, published in the journal Antarctic Science. Further, they warned, the penguins could disappear altogether within 20 years unless something changes. In other words, unless the 100-square-kilometer (40-square-mile) iceberg moves away or the sea ice breaks up.

The researchers counted the population as part of the Australasian Antarctic Expedition in 2013 and 2014. They observed about 5,500 pairs still breeding at Cape Denison. But in their paper they stress that the impact of the iceberg on the colony was "more dire than the census numbers alone would suggest."

Lead author Kerry-Jayne Wilson, of the West Coast Penguin Trust in New Zealand, said it was "heart-wrenching" to see how the penguins were affected. In the paper, the researchers describe finding "hundreds of abandoned eggs" and the ground "littered with the freeze-dried carcasses of previous season's chicks." 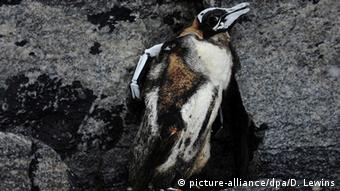 The penguin colony at Cape Denison was first documented a century ago by Australian explorer Sir Douglas Mawson. He described the cape as "the windiest place on earth," and accounts from members of his expedition referred to the raucous grunting from thousands penguins in the colony nearby.

"The ones that we saw at Cape Denison were incredibly docile, lethargic, almost unaware of your existence," said Turney, who works with the Climate Change Research Centre at Australia's University of New South Wales.

"The ones that are surviving are clearly struggling," Turney said. "They can barely survive themselves - let alone hatch the next generation."

The researchers also studied a separate Adelie penguin colony on the eastern fringe of Commonwealth Bay, just 8 kilometers from open water. Unlike the birds at Cape Denison, these penguins were "thriving," the paper reported.

Yvon Le Maho is the director of the National Scientific Research Center at the University of Strasbourg in France. He told DW that the decline in penguin numbers after such a dramatic change in the landscape wasn't a surprise and that it was highly possible that some of the birds had simply moved away temporarily.

"It is a key adaptation of Antarctic sea birds," Le Maho said. "They stay where they are when breeding is successful, and as soon as they fail one or two years in a row, they move away to start in another spot," he added.

Le Maho said the Cape Denison colony should be closely monitored and that it would be interesting to search other locations nearby to see if some of the birds had turned up there.

The Australasian researchers said their findings had "important implications" for the wider East Antarctic if the current trend of increasing sea ice were to continue.

"As the planet warms, you're going to get more ice melting," Turney said. "The reality is, more icebergs will be released from Antarctica and just embed themselves along the coastline and make the traveling distances for some of these colonies even further than they have been."

And, as long as that's the case, attempts by the Adelie penguins to breed and thrive in Commonwealth Bay will likely continue to fail.

The Galapagos Islands are renowned for their biodiversity. But this plant and animal paradise is under threat from climate change, prompting scientists to closely watch over the island’s penguins and giant tortoises. (22.04.2014)