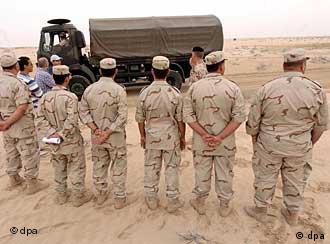 It's Peter Struck's second trip to Abu Dhabi in the United Arab Emirates. At the end of last year, he visited German troops who were training Iraqi soldiers to drive and repair the 100 military trucks donated by the German government.

This time, 50 German soldiers are running a two-month training program during which 85 Iraqi troops are being taught about mine awareness, rebuilding bridges and streets and how to operate heavy tools. 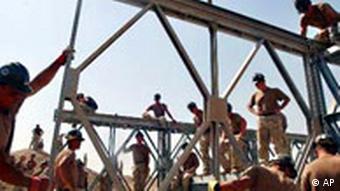 Building bridges is a big part of reconstruction

Some of the Iraqis are also learning how to be trainers themselves, and will be working alongside their German colleagues to train further soldiers in a second course scheduled for the autumn.

During his visit the German Defense Minister seized the opportunity make it clear that Berlin would be willing to offer Iraq more support as and when required. "What we are doing here is laying foundations. We are training members of the Iraqi army to become trainers themselves."

He stressed that it was important to concentrate on quality rather than quantity, adding that Germany is also prepared to support Iraq in other ways. 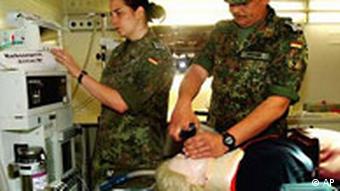 "We will give the Iraqis a military hospital in Abu Dhabi and medical vehicles which are needed there," Struck said.

Germany's mission in the United Arab Emirates is part of NATO efforts to build up Iraqi troops. He said that NATO has "high respect for the work we are doing in Abu Dhabi".

With the success of the current training collaboration in mind, plans have already been hatched for futher projects, including the training of doctors and medics.

On Tuesday, Struck will travel to the Afghan capital, Kabul, where 1,300 German soldiers who are part of the NATO-led ISAF security troops are currently stationed.

In a possible softening of its strict non-deployment policy in Iraq, Germany's defense minister said he could not rule out sending troops there in the future. (Oct. 13, 2005)

Schröder: No German Soldiers in Iraq

German Chancellor Gerhard Schröder has renewed his firm opposition to deploying troops to Iraq, slapping down hints at a change in policy from his defense minister. (Oct. 14, 2005)

Germany Opposes US Plan in Afghanistan

At a meeting of NATO defense ministers in Romania on Wednesday, Germany objected to Washington's proposal for NATO forces to take over the US military mission in Afghanistan as part of next year's reorganization efforts. (Oct. 13, 2004)