Strong effort, little tangible results mark the first year of the Obama presidency | World | Breaking news and perspectives from around the globe | DW | 19.01.2010

With his slogan, 'yes we can' Barack Obama not only won the presidential poll, but also the support of millions all over the world. But one year after taking office, it's clear that even he can't fulfill the high hopes. 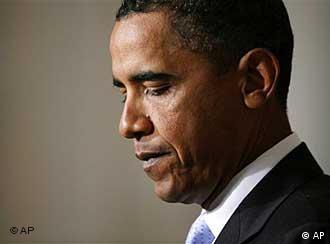 Obama has to deal with the realities of presidential politics

The comparisons were staggering. Long before Barack Obama won the presidential election he was already being likened to John F. Kennedy, Martin Luther King or Abraham Lincoln. During a campaign rally in Berlin in the summer of 2008 he was enthusiastically celebrated by tens of thousands of Germans and his autobiography became a global bestseller.

But huge popularity leads to huge expectations. His fans across the world wanted Obama to reverse as quickly and as thoroughly as possible what they considered an aggressive American foreign policy pursued by President George W. Bush. At home though, many Americans hoped that the new president in the midst of the worst economic crisis since the Great Depression would finally focus on the domestic needs of the people instead of global conflicts. And it seems that his apparent neglect of a key domestic issue - his health care reform project - has cost him dear in Massachusetts, where the Republicans surprisingly captured the Senate seat left vacant following Democrat Edward Kennedy's death.

It was clear from that outset that fulfilling this set of partly contradictory expectations would prove to be difficult even for such a rhetorically gifted politician as Obama. And indeed says, Reinhard Rode, a US expert at the University of Halle, the glamour and appeal of the candidate Obama has suffered after President Obama completes his first year in office.

"Especially in Europe, but also among some of his other constituents, out of frustration over his predecessor he was elevated almost to the level of political saint," Rode told Deutsche Welle. "And of course at some point disillusionment and reality set in and this has happened now."

As a consequence, Obama's job approval rating in the US sank from more than 70 percent at the start of his administration to around 50 percent right now. What's more, even in Europe Obama's popularity has suffered, because the high hopes of many Europeans that the new president by the sheer power of his office and personality could solve many international problems have evaporated during the first 12 months of his presidency.

"A lot of what one would have hoped for in a best case scenario has not been achieved," Michael Zuern, a US expert at the Social Science Research Center Berlin, where he directs the program on transnational conflicts and international institutions, told Deutsche Welle. "If you look to the two or three most urgent issues which are currently on the agenda, namely climate, financial regulation and to some extent the Middle East, he really was so far not able to translate this willingness of some of his partners to follow him into a real leadership position."

While Obama hasn't had a major foreign policy success, he has not only broken with the style and tone of the Bush administration, but also with its policies in many areas.

Obama not only rhetorically declared an end of the era of unilaterialism, he also charted a new course in very practical terms on a host of issues: He called on Iran to start a dialog with the US, eased the economic embargo and travel restrictions against Cuba, began withdrawing American troops from Iraq and stopped the planned missile shield deployment in eastern Europe.

The fact that the reaction to many of these measures wasn't as positive as Obama and others would have wished for just proves that in a globalized world even a well-intentioned American president can't solve the problems alone. This also holds true for Afghanistan, perhaps the most difficult international conflict, where Obama has finally decided on a troop surge in what could be a last-ditch effort to stabilize that country.

There is no solution in sight to the conflict in Afghanistan

The return of the M-Word

Obama's most important foreign policy initiative is one that can't be defined geographically or by an international agreement. Instead Obama has reopened the US to the world and cast away the "with us or against us" attitude of the Bush administration, according to Michael Zuern:

"The term multilateralism is once again a term one can talk about. What's more, international norms are recognized and therefore one can conclude that there definitely have been some important changes."

Scott Lucas, a US foreign policy expert at the University of Birmingham, concedes that Obama has made important strides in how Washington interacts with the world, but worries that this might not be enough to solve the most pressing issue:

"They have tried to replace the language of confrontation of the Bush administration with the language of the unclenched fist as President Obama put it in his inaugural address. That said, I wrote at the time, for all his good intentions and the excitement of this man becoming president, that this administration could sink because of the issues in Afghanistan and in Pakistan. And I have to say one year later that that fear is greater than ever," he said.

Despite the lack of a significant foreign policy achievement, Obama has, surprisingly for many, succeeded in an area where the last Democratic president, Bill Clinton, failed miserably: health-care reform. To be sure, the huge project to extend health-care coverage to all Americans has still not been wrapped up, but after tough negotiations Obama's prestige project has survived critical votes in Congress and stands a good chance of being passed before mid-term elections in November. 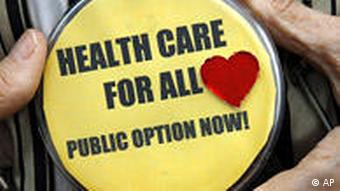 Despite many concessions, Obama has made progress on health care reform

Considering the tremendous challenges and the high expectations he faced at the start of his first term, Obama overall has done a good job as president, said Rode: "I would give him a B in both foreign policy and domestic policy. Definitely not an A, but this year was really not a year where A's were to be had."

His colleague Michael Zuern also gives Obama good marks for his first year in office, even though he did not meet many of the high hopes that were placed in him. For Germans, who according to many polls are some of the president's staunchest supporters and who may feel disappointed that Barack Obama and Joe Biden haven't brought about enough change in US policy, Zuern offers some advice. Just compare their performances to those of George W. Bush and Dick Cheney or think about what US foreign policy would have looked like under John McCain and Sarah Palin.

American President Barack Obama has received the Nobel Peace Prize at an award ceremony in Oslo. He said that, under certain circumstances, the use of force was necessary. (10.12.2009)

In Barack Obama, Europe got the president it wanted. But instead of supporting his shift on climate change and other topics, Europeans still have unrealistic expectations, says the head of an EU think tank. (08.12.2009)

US President Barack Obama faces growing opposition to his divisive reform plan for the country's costly healthcare system. Experts believe European models may help him formulate a system which will work for Americans. (09.09.2009)