La Soufriere volcano continues to blast " explosively," prompting thousands to evacuate their ash-covered homes. Scientists warn that explosions, possibly of larger magnitude, are likely to continue over the next days. 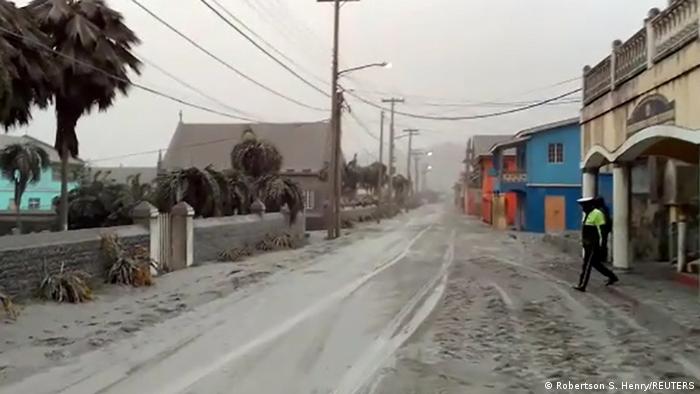 The Caribbean island of St Vincent and the Grenadines on Monday experienced "a huge explosion" and  the production of "copious amounts of ash" at La Soufriere volcano, the University of the West Indies' Seismic Research Center said.

"The team has reported a huge explosion and PDCs at 4:15am this morning. We continue to monitor and update accordingly," the research center tweeted.

The Seismic Research Center added that "explosions and accompanying ashfall, of similar or larger magnitude," are likely to continue over the next few days, possibly extending impact over to neighboring islands.

Researchers are also investigating an interesting "phenomena" in the upper parts of the Rabacca valley – where they observed steaming.

A series of eruptions on St. Vincent

After decades of inactivity, La Soufriere first erupted on Friday, blanketing the island in a layer of ash and forcing more than 16,000 people to flee their homes. The heavy weight of its ashfall damaged several buildings, causing power cuts and disrupted water supplies over the weekend.

Emergency officials have described the situation in St Vincent as a "battle zone."

So far there have been no reports of anyone being killed or injured by the volcano blasts.

Ralph Gonsalves, the prime minister of the 32 islands that make up the country of St. Vincent and the Grenadines, has warned people should remain calm and try their best to keep protecting themselves from the coronavirus.

By late Monday afternoon, authorities restored electricity to most of the island.

Neighboring countries to take in evacuees

Some 3,200 people sought refuge at 78 government-run shelters. People staying at the shelters were tested for COVID-19, with anyone testing positive being taken to a quarantine center.

Four empty cruise ships have been set up ready to take more evacuees to nearby islands. Over 130 people have already been transferred to St. Lucia.

Nearby island nations, including Antigua and Grenada, have also offered to take in evacuees.