Commuters in Brussels arrived to work late and got stuck in kilometer-long traffic jams after transport workers staged a spontaneous strike. They were protesting against low safety conditions after a driver was attacked. 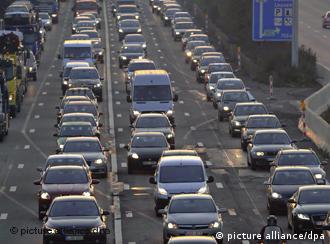 Commuters got caught in traffic after a transport strike

Rail and bus workers in Brussels have gone on a spontaneous strike in protests against poor safety conditions on public transport, paralyzing the Tuesday morning commute.

Most subway trains, trams and buses stayed in their depots. Only a few buses were in service according to the transport company STIB. The action is expected to continue for the rest of the day

Thousands of commuters arrived at work late and struggled through kilometer-long traffic jams.

The workers walked out in reaction to a passenger attacking an underground train driver, as he left his cabin on Monday evening. A security guard who intervened was also injured. It is not known how badly the men were injured.

Union and management from the transport company are expected to meet later on Tuesday to discuss plans to strengthen security on the underground.

Crime has long been a problem in Brussels. According to a study by the Belgian radio broadcaster RTBF, in the first half of 2010 a crime was recorded by the police every 31 seconds.

In Athens, transportation workes have been on strike since Monday because of government cost-cutting reforms and plans to privatize part of the cash-strapped sector.

The 24-hour stoppage affected trams, buses, the underground and trains in the Greek capital as tens of thousands of commuters were forced to use their cars to get to work.

Central Athens is likely to be gridlocked later Tuesday

when protesters march towards parliament where lawmakers will be voting on a crucial bill that paves the way for the privatization of sectors of transportation.

Athens is implementing a wave of economic reforms as part of a bid to slash public spending in exchange for a 110 billion euros (149 billion dollars) rescue package from the European Union, European Central Bank and International Monetary Fund.

Strikes shut down Athens public transportation ahead of austerity vote

Athens is once again facing serious travel and business disruptions this week as public and private sector unions strike to protest new government austerity. The budget cuts were prescribed by the EU and IMF. (14.12.2010)

Thousands of Czechs set to strike over pay cuts

Czech labor unions said that 100,000 civil servants and other state employees plan to join a day-long strike on Wednesday over cuts to public sector salaries. (08.12.2010)

Hundreds of thousands of passengers inundated Spain's airports on Sunday as the military forced air traffic controllers to end a 24-hour wildcat strike with the threat of imprisonment. (05.12.2010)