Spike in Russian military activity is about more than Ukraine | World | Breaking news and perspectives from around the globe | DW | 10.11.2014

Spike in Russian military activity is about more than Ukraine

A new study details the rise in close encounters between Russian forces and the West this year. The increase coincides with the Ukraine crisis, but it would be wrong to view it only in the light of recent events. 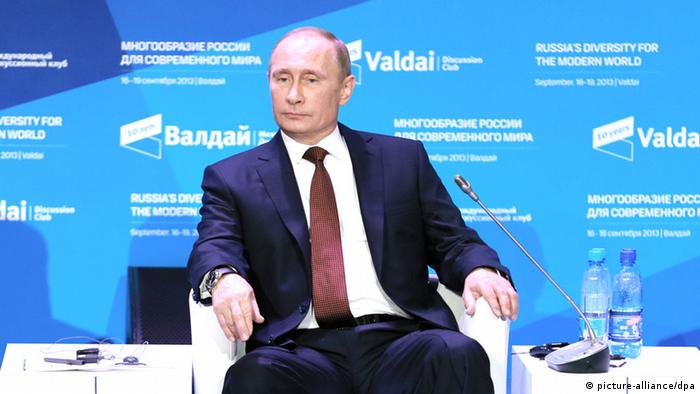 Ten days ago the Portuguese air force scrambled to intercept Russian bombers in the international airspace along its coast. Local media said the Russian planes involved were two strategic bombers which flew near the approach path for commercial aircraft to Lisbon international airport. It was the second such incident within several days and the latest sign of a spike in Russian activity close to NATO's borders.

NATO recently said it had launched more than 100 intercepts of Russian aircraft so far this year - three times more than in all 2013. The alliance called the rise in Russian flights an "unusual level of air activity over European airspace."

Now, the London-based European Leadership Network (ELN) has published a study listing 45 close encounters by Russian forces with the West.

Among the encounters detailed are several classified as "high risk":

- a near collision earlier this year between a Scandinavian airliner carrying 132 passengers and a Russian warplane that was flying covertly.

While the majority of incidents occurred around Europe, some happened as far away as the Pacific.

That Russia's increased military activity extends across the globe - and not just around NATO's eastern border - indicates that Moscow's actions are not just linked to the crisis over Ukraine.

"I think it is a fundamental mistake to see what is going on in the light of the events in Ukraine only," Igor Sutyagin, a Russia expert at Britain's RUSI think-tank, told DW. From the Kremlin's perspective, this is about much more, he added. "The issue is to change the international order."

In an anti-Western speech in October at the Valdai Club, Russian President Vladimir Putin not only blamed the West for the conflict in Ukraine. Putin also emphasized that Russia was a strong state more than two decades after the end of the Cold War and that Moscow would not "beg" in response to the sanctions imposed on it by the United States and the European Union over the crisis in Ukraine.

That speech, noted Sutyagin, was the first part of Putin's message to the West. "What Putin effectively said is that the world is the taiga and Russia is the bear in this taiga. And the bear never asks anybody's permission to act." 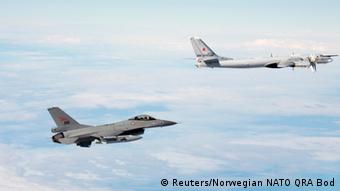 A Russian bomber is escorted by a Norwegian F-16

The second part of Putin's message is the rise in Russia's military activities, said Sutyagin. "The idea is to have Russia act absolutely freely without any restrictions applied by the universally recognized rules."

The Kremlin's new stance should not come as a surprise as it is rooted in its military and foreign policy doctrine, Marcel de Haas, a Dutch expert on Russian military affairs at Nazarbayev University in Kazakhstan, told DW.

But the rise in military missions is not only meant to send a message to the West: Moscow also wants to show the former Soviet republics who is boss.

"In the same documents it is mentioned that Russia regards itself as the successor state of the Soviet Union and as the leader of all Soviet republics and it grants itself the right to interfere in these former Soviet republics if they don't behave in a way Moscow would like to see," said de Haas.

Finally, the spike in military incidents also serves a domestic purpose. Putin's popularity was on the wane due to the country's socio-economic problems before the crisis over Crimea and Ukraine exploded, de Haas noted.

Since then his ratings have gone up. The increase in military encounters with the West is supposed to cement his image. "Russians always like a strong leader," said de Haas. "They like to see their country as a strong country which opposes other countries, especially the West, and this is simply what he is doing."

While the scholars don't expect Russia's military activities to level off completely, we may already have seen the peak of Moscow's muscle-flexing. "It will be difficult for Russia to maintain this level of activity for a long time," explained Sutyagin."They simply don't have enough resources."

A study has claimed that dangerous military incidents involving Russia and the West have occurred with greater frequency since the outbreak of the Ukraine conflict. Some of them could have caused deaths - or conflict. (10.11.2014)

German Foreign Minister Steinmeier has urged all sides in the Ukraine conflict to respect a ceasefire deal struck two months ago. The EU and US have voiced concern over an unmarked military convoy spotted in the region. (10.11.2014)

Hundreds of people have paid their respects to the 298 killed aboard Malaysian Airlines Flight 17 at a ceremony in the Netherlands. The Boeing 777 was downed in July over the conflict zone in eastern Ukraine. (10.11.2014)