Speak up! What your voice reveals about your character | Science | In-depth reporting on science and technology | DW | 13.05.2022

Speak up! What your voice reveals about your character

When we listen to a voice, we automatically connect it to the person's personality. But what does the voice actually say about a human's character? 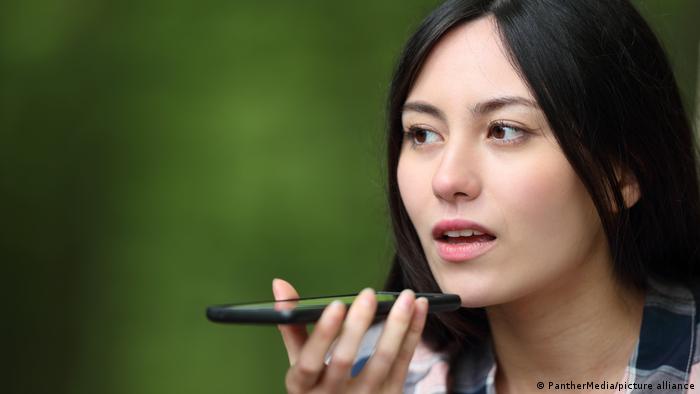 What conclusions do you draw when you hear someone over the phone?

Most people are probably familiar with this: We talk to a stranger on the phone or listen to a podcast and our minds automatically create an image of the person speaking.

We imagine their age and gender and whether the person is small and delicate or tall and strong. We also hear whether they are sad, friendly, interested or nervous.

And we believe that we can get an impression of the person's personality just by hearing their voice.

Psychological studies have shown that a person's voice plays a role when it comes to choosing a partner and – in the case of a politician – it can also have an influence on people's voting behavior.

The pitch of the voice seems to be particularly decisive in all of this. In numerous studies, test persons tended to associate a rather deep voice with dominance, attractiveness, intelligence and honesty.

This may sound like devastating news for anyone who thinks they have a squeaky or weak-sounding voice. But the main things that have been studied so far are the associations the sound of a voice arouses in the listener. And that doesn't tell us a lot about the actual character of the person speaking.

What does my voice reveal about me?

Christoph Schild, a psychologist at the University of Siegen, says that people can be quite wrong when they interpret a voice: "Mike Tyson, for example, is known for his rather high voice, but at the same time [Tyson] is probably more likely to be seen as a dominant person."

Schild was part of a research team led by psychologist Julia Stern, who previously worked at the University of Göttingen. The team was trying to find out if a person's voice has any real bearing on their personality.

To cut a long story short: Yes, you can determine some personality traits through a person's voice. But only a few.

Data on sexual behavior and desire

The researchers recruited 2,217 men and women for their study,with women slightly outnumbering men, and published a paper in 2021.

Stern and their team wanted to know whether a high or deep voice was associated with certain character traits.

They wanted to test whether people with deeper voices were more dominant, more extrovert, had a less pleasant nature and were more sexually active.

The researchers recorded the sounds of all the participants to determine the exact pitch of their voices. Both age and gender were taken into account.

In addition, the researchers collected data on sexual behavior and desire. The participants had to indicate how dominant, extroverted, neurotic, open-minded and conscientious they consider themselves.

People with lower-pitched voices cheat on their partners more often

It turned out that people with deeper voices were more dominant, extroverted and more likely to be interested in non-relationship sex, according to the study.

"Researchers currently assume that differences in voice depth could be a result of sexual selection," says Schild. "It is believed that voice depth acts as an 'honest' signal that is intended to scare off potential competitors and appeal to potential mates."

Based on this assumption, Schild says it would make sense if a deep voices were related to personality traits associated with how we pick sexual partners, such as dominance.

Not everything comes down to voice

But other personality traits cannot be linked directly to the voice. A person's voice is unlikely to tell us how neurotic, conscientious or open-minded they are.

Perhaps that offers some comfort for any readers who feel they struggle in life and relationships because they lack a deep voice: A deep voice does not automatically translate into a glamorous personality. There are so many other important character traits about which the voice tells us very little, no matter how much we enjoy listening to it.

How our hearing works