Sparks Expected to Fly Whoever Becomes France′s President | Europe | News and current affairs from around the continent | DW | 13.02.2007

As the frontrunners in the French presidential race, Nicolas Sarkozy and Segolene Royal, make their way to Berlin, DW-WORLD.DE asks what the election result will mean for Germany and the European Union in general. 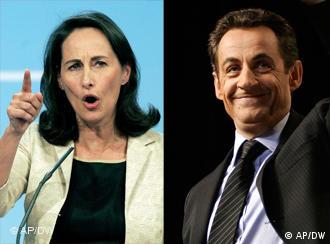 As the French presidential campaigns enter their final stage, the top contenders, Nicolas Sarkozy and Segolene Royal both announced trips to Berlin ahead of the first round of polls on April 22. Opinion polls suggest it will be a tight race. The outcome could have wide ramifications for the European Union over the next few years.

Sarkozy, currently France's interior minister, arrived on Monday in Berlin, where he met with Chancellor Angela Merkel and his German counterpart, Wolfgang Schäuble. There was no official comment from the German government on the talks.

Analysts however say the two are expected to search for common ground on a host of issues.

"Merkel and Sarkozy already know each other quite well, but what is essentially different this time is that he will most probably be France's next president," said Martin Koopmann, director of the Franco-German Institute of the German Council on Foreign Relations. Sarkozy has been to Berlin before as France's interior minister

"They will undoubtedly discuss the German EU presidency and the EU constitutional treaty, but it will be very difficult to realize anything more than rhetorical statements," Koopman said.

"Sarkozy comes from the same political family as Angela Merkel, but at the same time there are many differences between UMP ideas about European neighborhood policy and how to deepen cooperation inside the EU."

Turkey's entry into the EU is one point where Merkel and Sarkozy seem to meet, albeit via different routes. With talks on Turkish membership essentially stalled, Merkel put some noses out of joint last year when she spoke of a "privileged partnership" with Europe, rather than actual EU membership. Instead of privileged, Ankara is starting to feel distinctly like a second-class passenger on the enlargement train.

Sarkozy has proposed the idea of a Mediterranean Union, modeled on the EU, but which would include Turkey. He said the union would work closely with the EU, and have some shared institutions. The plan would institute a "shared judicial area," to combat corruption, terrorism and organized crime, including people smuggling. Sarkozy said it would also incorporate tighter immigration controls, a ploy he hopes will woo voters from further right. 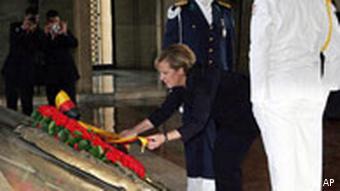 Sarkozy's Mediterranean Union idea also offers a convenient alternative solution to the thorny Turkish issue. Sarkozy has made no secret of his antipathy to Turkish EU membership, a stance which has received popular support from the French electorate.

"This idea concentrates more on French regional interests," Koopman said, "The inclusion of Turkey in this proposed Mediterranean Union is meant as an alternative to future EU membership for Turkey, but how will he explain that to Turkey?"

The independence of the European Central Bank, which has become a central point in the French presidential race, is an area where Sarkozy and Merkel aren't likely to be quite as cozy. The German government regards the ECB as an institution above national politics.

The French, on the other hand, believe it should be more responsive to individual governments' needs. That argument has been fuelled mainly by French exporters feeling the pinch of a strong euro -- kept high by the ECB's repeated rate hikes in the last 12 months.

Segolene Royal plans to head to Germany in early March, but her talks in Berlin may not be as congenial. Her policy agenda puts a greater distance between her party and Angela Merkel's CDU, Koopmann said.

Royal's social policy -- among other things calling for a higher minimum wage and higher unemployment benefits -- is at odds with German policy and much of Europe's.

"Her ideas about a welfare state, from a German point of view, they're really all yesterday's ideas," he said. 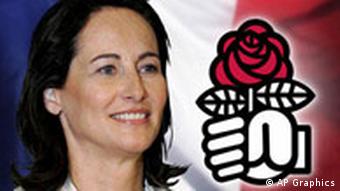 Royal's socialist ideals are out of line with Germany

Royal promised in her 100-point plan for France, announced Sunday, to raise the monthly minimum wage to 1,500 euros ($1,950) from 1,250 euros; to increase small pensions by five percent and offer free health care for children under the age of 16.

She also proposed the creation of educational centres for delinquents that could be run by the military and of "citizens' juries" that would watch over government policy.

The 53-year-old mother of four also proposed the construction of 120,000 new social housing units per year and 10,000-euro loans for young graduates.

Reactions in France were mixed with some saying that the manifesto provided benefits to both socialist and conservative voters while others complained that Royal failed to provide financial details as to where all the money needed to fund her program would come from.

Koopmann said the two frontrunners operate in very different ways. Sarkozy is more pragmatic and autonomous while Royal is bound by party doctrine.

"Sarkozy doesn't care so much about Gaullist ideas (as his predecessors) and seems to be freer to define his own positions. Royal depends more on the left wing of the French Socialists, and so is more inclined to defend positions of social democracy."

One of the major differences between the two candidates, with broader implications for the EU, is over the future of the bloc's constitutional treaty. Sarkozy campaigned for a "yes" vote ahead of the 2005 referendum in which the French people rejected the draft. Royal was firmly in the "no" camp.

Sarkozy has since tried to revive the reform process, initially with a "mini-treaty." Now he favors a simplified version of the original. Royal, in keeping with her social democratic agenda, wants another treaty referendum in 2009.

Should Royal win the race, France would still have to work within the frame of the European Union, but could make further reform difficult, Koopmann said.

"They won't have a choice really, and they will continue to work within the EU on the basis of the Nice Treaty," he added.

"The question is how to reform the EU without French support? The same difficulties would remain for years to come."

One of the main goals of the German EU presidency is to resurrect the European Union constitution. But some say that is not going to happen. (26.01.2007)

DW-WORLD.DE takes a look at comments in European papers about the nomination of French Interior Minister Nicolas Sarkozy as conservative candidate in the April presidential elections. (15.01.2007)

Europe's center-left parties and the media on Friday hailed as a "revolution" the choice by French socialists of Segolene Royal as their party's candidate for the April 2007 presidential election. (18.11.2006)

Merkel 'stands by' past Ukraine NATO decision after Zelenskyy criticism 04.04.2022

The Ukrainian president hit out at Angela Merkel and Nicolas Sarkozy, blaming them for the current war and suggesting their 2008 stance against admitting Kyiv to NATO was a clear "miscalculation" that emboldened Russia.

French elections: What the president's furniture says about France 15.04.2022