The driver involved in Spain's worst train wreck in decades has refused to respond to police questioning, according to authorities. Spanish police are looking to see whether the driver was going at a reckless speed. 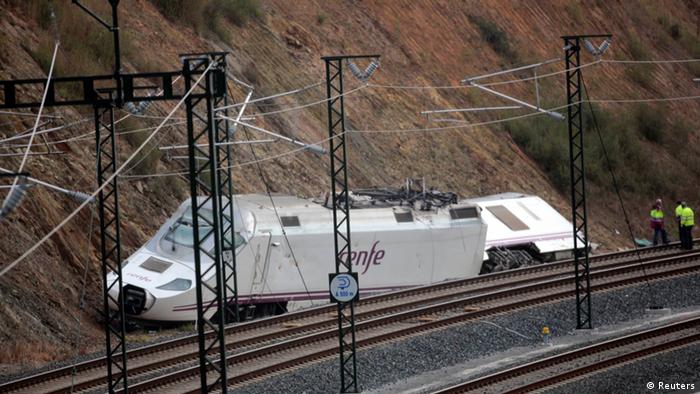 As Spain begins to mourn the loss of at least 78 people, killed in Spain's worst train wreck in decades on Wednesday, police have begun searching for answers for the crash.

Friday's questioning of Francisco Jose Garzon Amo, however, did not go smoothly.

"The driver has refused to answer the police authorities," a police spokesman told the AFP news agency, adding that the case will now "proceed to a judicial process as soon as possible."

A spokeswoman for the supreme court in the Galicia region said the driver had not yet been charged and that evidence was being gathered.

"We're collecting elements to be used as evidence, videos, audios and all the technical work that is being done on the train," she said.

The train's black box, for example, was located on Friday and is expected to shed more light on the accident's cause.

While still trapped in the crash on Wednesday, Garzon Amo had initially told railway officials that the train had taken the curve at 190 kilometers per hour (118 miles per hour), more than double the speed limit for that section of track.

The section of track where the crash occurred was lacking the more advanced European Train Control System that automatically slows trains if they are going faster than the permitted speed.

The railway company Adif said on Friday that Garzon Amo should have applied the brakes four kilometers before reaching the spot at which the train derailed.

Renfe, the Spanish state train company, said Garzon Amo was a 30-year company veteran who was highly qualified. He had been driving for 10 years, and he had been driving on the line where the accident took place for about a year.

Of the 78 killed, five were foreigners – an American, an Algerian, a Mexican, a Brazilian and a Venezuelan, police said. Six victims remain unidentified, and 95 remain in the hospital.

Despite initial looks into speed and possible recklessness, authorities are being urged to slow down and investigate with "prudence."