Spaniards take to the streets to mark protest anniversary

Protesters in Spain have taken to the streets again to mark the one-year anniversary of the 'Indignant' protest movement. But the authorities seem determined to keep the demonstrators in line. 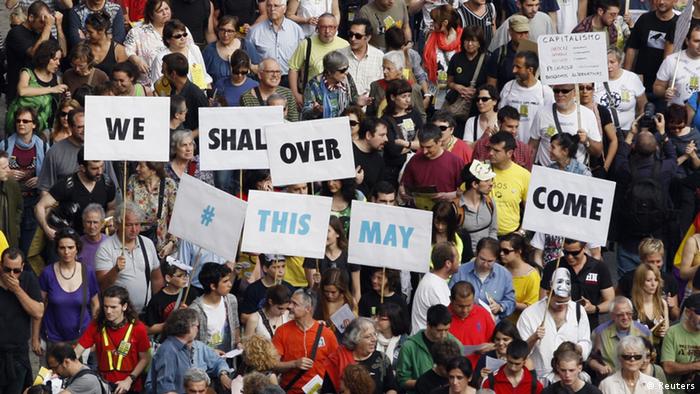 Tens of thousands of Spaniards took to the country's streets on Saturday to protest their government's economic failings and mark the one-year anniversary of the "Indignant Movement," which first rocked the Spanish political establishment last May.

Mass protests against austerity in Spain

"I'm here to defend the rights that we're losing and for the young people who have it so tough," said one protester, Roberto Alonso, a 57-year-old middle school teacher.

Protesters staged rallies in 80 cities and towns across Spain, including the capital Madrid, where they poured into the central Puerta del Sol plaza in the evening with the intention of staying there for three days.

But the activists' permit to be in Puerta del Sol stipulates that they must vacate the square by 10 p.m. local time (2000 GMT) on Saturday and authorities said they would not be allowed to camp overnight. Two thousand riot police were anticipated to be on duty, in a clear sign that the authorities are determined to prevent a repeat of last year's month-long occupation of Puerta del Sol

Madrid interior ministry official, Cristinia Cifuentes, indicated on Saturday that there would be a sufficient police presence to enforce the law.

"They will ensure there are no encampments because those are illegal activities. You cannot camp in the centre of the city, and I am going to ensure the law is carried out," she said to Europa Press news agency.

The protestors, known as the "indignants," first began protesting on May 15 last year. Their decrying of their country's economic plight and the enforcement of stringent austerity measures sparked demonstrations across Spain and Europe.

Spain is sinking into a deep recession, with one in four Spaniards unemployed. Fears that it will follow in the footsteps of Greece, Ireland and Portugal and require an EU/IMF bailout are rising.