Germany's hopes were dashed Sunday when Spain took home the title in the European Championship soccer final in Vienna. Fernando Torres scored the single goal in the intense match, which brought many German fans to tears. 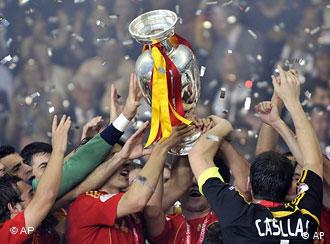 Spain won their second European title in fine style on Sunday, deservedly beating a weak Germany 1-0 in Vienna, on a goal from Fernando Torres.

The handsome win culminates a stunning Euro 2008 for Spain, who have won five games and drawn one, scoring 12 goals and conceding just three since the European Championships kicked off on June 7 in Switzerland. 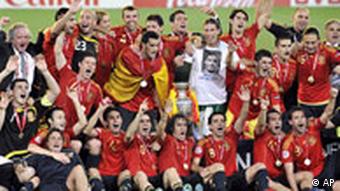 The Spanish team in victory pose after beating Germany.

Sunday's win was Spain's first international triumph since 1964, when the European Nations Cup, as it was called then, was much less important than it is today.

Curiously, this was the first game in which Spain - preferring an intelligent counter-attacking strategy - did not dominate possession from the beginning.

Luis Aragones' young team only had 48 percent ball possession, but nonetheless created countless chances and should have scored more goals.

Germany, in contrast, failed to create a single clear chance and were clearly outclassed. True to tradition, however, they battled until the bitter end, despite their fatigue, frustration and injuries.

Joachim Loew's team made an aggressive start, determined not to let Spain dominate, but then the Germans lacked the craft to create clear chances.

Spain slowly but surely got their act together and almost went ahead in the 14th minute, when German keeper Jens Lehmann had to keep out a deflection from defender Christoph Metzelder. 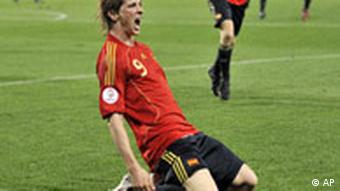 The only goal came in the 33rd minute. The majestic Xavi Hernandez played a tempting through ball for Torres, who powered his way past Philipp Lahm and beat the Lehmann with a clever chip.

Germany adopted a more direct approach in the second half, but with captain Michael Ballack not looking a hundred percent fit -- and with striker Lukas Podolski and Miroslav Klose well marked and Philipp Lahm out with an injury -- they were running more on hope than expectation. 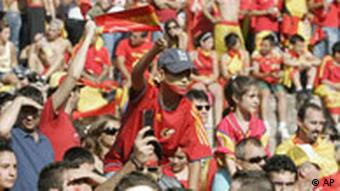 The capital was awash with the red and gold national colours, as the country celebrated the Euro victory in true Spanish style. The deafening sounds of cheering, klaxons and drums from the vast Plaza Colon, where thousands watched the match live from Vienna on giant television screens, mixed with those of car horns across the city. 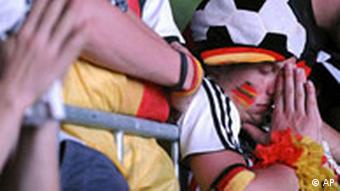 Fans of Germany's soccer team were stunned into disbelief after their team lost to Spain. The disappointment was visible on the faces of thousands who gathered in public viewing areas and fan miles to watch the match on giant screens.

Yet despite the loss, and the second-place finish, Germany supporters applauded Spain's victory and praised Germany's solid run.

Read up on all the action that made the Euro 2008 so great on DW-WORLD's sports page.

More than three hours ahead of Germany's Euro 2008 final with Spain on Sunday, authorities were forced to close the Berlin fan mile due to overcapacity. (29.06.2008)

At half-time, Spain had a 1-point lead over three-time champion Germany in the Euro final in Vienna. Striker Fernando Torres scored the goal in the 33rd minute. (29.06.2008)