The aerospace manufacturing company has launched a rocket with boosters from a previous flight. Experts called the launch "historic," with the potential to pave the way for less expensive space travel. 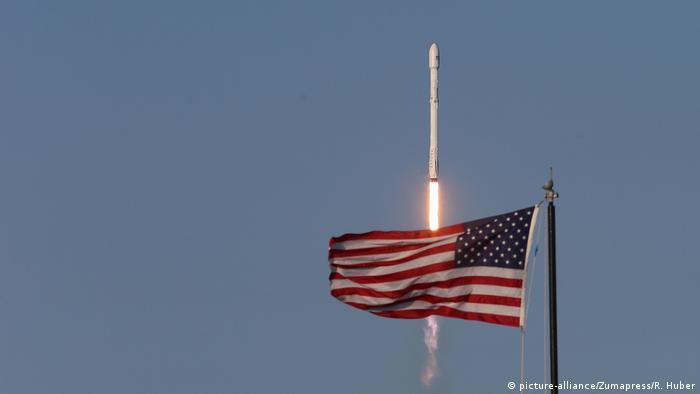 SpaceX CEO Elon Musk exclaimed there was a "revolution in spaceflight" Thursday after one of his recycled rockets successfully entered orbit for a second time.

The Falcon 9 rocket launched from Cape Canaveral, Florida at 6:27 p.m. (2227 UTC) local time Thursday to launch a communications satellite into orbit for Luxembourg-based communications satellite owner and operator SES S.A. The rocket went into a geostationary transfer orbit, going as high as 22,000 miles (35,000 kilometers) above the Earth's surface before safely returning.

SES S.A. chief technology officer Martin Halliwell called Thursday's launch, "a big step for everybody – something that's never, ever been done before."

Successful rocket launch: cargo ship on its way to ISS

Successful rocket launch: cargo ship on its way to ISS

The rocket used Thursday sent cargo to the International Space Station in April 2016. The previous flight for the Falcon 9 rocket ended in the ocean. But Thursday's flight saw the rocket land upright on a drone ship in the Atlantic Ocean, making it much easier to reuse the rocket in the future. This would drastically lower costs for space travel.

SpaceX has stated reusing hardware reduces the cost of launching a Falcon 9 rocket by about 30 percent. Every Falcon 9 launch currently costs over $61 million (57 million euros). But the life of re-used boosters, the most expensive part of the rocket, is unknown. SpaceX is hoping the boosters can be re-used as many as 10 or 15 times. Halliwell declined to say how much Thursday's launch cost.

Looking into the future

Musk has high expectations for SpaceX and what it will do for the rest of 2017 and beyond. SpaceX is planning to launch up to six reused boosters by the end of the year. The company is also working towards launching two paying customers to the moon in 2018.

Ultimately, Musk wants to send people to and from Mars and colonize the planet. He believes it will be possible with a quick turnaround and re-use of boosters, which are typically discarded after a single use.

"The potential is there for (an) over 100-fold reduction in the cost of access to space. If we can achieve that, it means humanity can become a space-faring civilization and be out there among the stars," said Musk.

SpaceX is not the only company that is attempting to reduce the astronomic costs of flying into outer space. Blue Origin, an aerospace manufacturer started by Amazon founder Jeff Bezos, has also reused rocket parts in separate launches. These flights, however, did not put anything into orbit.

The US space program, NASA, previously looked into reusing rocket parts. When its space shuttle program was still in operation, the booster rockets broke away from a shuttle two minutes after launch and parachuted into the Atlantic Ocean.

The 15-story high booster portion of the rocket successfully returned to earth with a controlled, upright, landing. SpaceX hopes to begin carrying astronauts to the space station in 2018 and, eventually, to Mars. (19.02.2017)

SpaceX rocket lifts off from Florida