Protesters in Thailand have vowed to press on with rallies, setting the stage for the continuation of a dispute mainly pitting dissenters in Bangkok and southern Thailand against Pheu Thai supporters in the north. 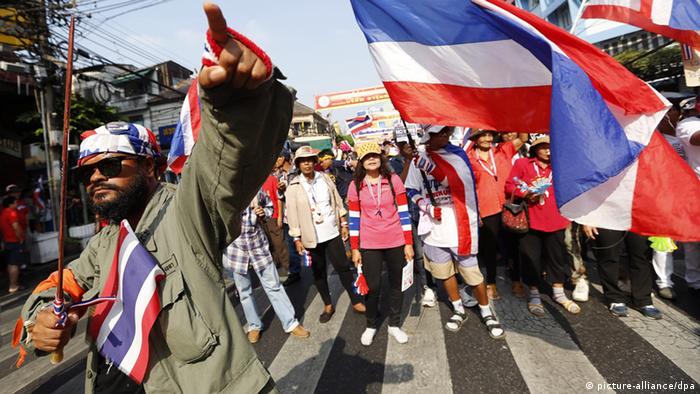 "Ek," a ticket seller at a Surat Thani bus station, was ebullient after his fellow southern Thais sabotaged Sunday's election, keeping millions from casting ballots, especially in nine southern provinces that had no candidates or open polling stations.

"I haven't voted in 17 years. Thai politicians are very bad. Corruption, corruption, corruption!" said "Ek," who identifies himself by his nickname. "Thaksin and his sister are the same," he adds, referring to PM Yingluck Shinawatra and her self-exiled brother and former premier, Thaksin. "They cheat every time and call it democracy to fool people. Enough already!"

Like "Ek," several people interviewed by DW in the southern provinces of Surat Thani, Krabi and Phang-nga over the past two weeks argue that the controversial tactics applied for months by anti-government protesters especially in the capital Bangkok - occupying intersections, locking government offices, blocking distribution centers for ballot materials - are "working and justified."

Analysts predict the political confrontations in the Southeast Asian nation will dampen domestic consumption and investment this year. Moreover, Thai GDP growth momentum has already slowed sharply from the 6.5 percent growth rate of 2012 to just 2.7 percent by the third quarter of 2013, the chief Asia economist of the analytics firm IHS, Rajiv Biswas, told DW. 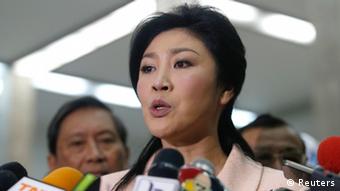 Opponents want to force PM Yingluck to resign. They claim she is a puppet of her self-exiled brother andf former premier Thaksin

Many southern Thais claim their desperation is rooted in economics, and not only in two decades of losing elections to more populous northerners. Prices for gas and propane tanks have doubled, and food items such as crabs, shrimp and lemons have risen threefold.

"Everything is too expensive now," says "Boy," a food-seller near boats going to Koh Samui and Koh Pha Ngan. "Prices are going up and our business is going down."

While PM Yingluck's administration fixed rice prices above market levels to sway northern farmers loyal to her Pheu Thai Party, the price of rubber - a key agricultural product for southern Thailand's 8.7 million people - has fallen by 50 percent in the past three years. Experts disagree, however, on what the government could have done to prevent global rubber prices from dropping.

Protest leaders in Bangkok, meanwhile, say they will keep pressuring Yingluck to resign. They want to install an unelected "people's council" to "purge" the influences of her brother Thaksin who lives in self-exile in Dubai to evade a corruption conviction which he says was politicized to rob him of assets and power.

The demonstrators, who accuse Yingluck of being a puppet of Thaksin, have staged some of the largest street demonstrations in Thai history over the past three months, but so far Yingluck has refused to step down.

While some reports suggest smaller crowds at protest sites after the February 2 general election, supporters of anti-government campaigner Suthep Thaugsuban, who hails from Surat Thani, say they have the momentum. 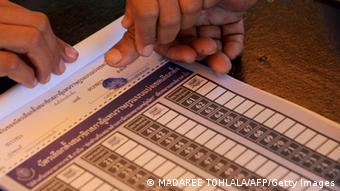 Turnout nationwide was 75 percent in 2011. Last Sunday, only 733,000 (about 16 percent) of the 4.3 million registered voters in Bangkok cast ballots, according to the Bangkok Post. Many government strongholds in northern Thailand saw less than 55 percent turnout, while Chiang Mai had the highest at 75 percent.

Election Commission officials said they won't release final results and declare winners until by-elections are held in the coming weeks. Two days after the vote, the opposition Democrat Party, which hasn't won an election since 1992, asked the Constitutional Court to annul the snap election, as the court did after Thaksin's party won the 2006 election.

'We need to clear our house'

Many observers blame the Democrat Party and its allies for disrupting the election process in the first place, and plotting behind the scenes to overthrow the government by military coup or judicial procedures. Editorials in the New York Times, Wall Street Journal and Financial Times have joined a large number of Thais and expatriates who condemned protesters for disenfranchising an estimated 300,000 voters in Bangkok and many others further south.

Supagong Songmuang, a tractor operator in Surat Thani, says foreigners - and many pro-government Thais - misunderstand their movement's goals. "They say we hate democracy, but we want purer democracy. We need to clean our house first, then we can have a real election. Thaksin and Yingluck wanted this election to legitimize their crooked rule, but we refused to play their game. We won't give them the legitimacy they seek."

Working in northeastern Thailand recently, Songmuang claims he saw first-hand how Thaksin's operatives paid poor villagers 500 baht each to vote for them, and also gave each village more than one million baht in advance. "It's vote-buying. That's how Thaksin wins."

However, Thailand-expert Marco Bünte believes allegations of vote-buying are overstated. Parties have indeed showered "gifts" on the rural populace to win votes, but studies have shown that farmers freely exercised their right to vote and elected their favorite representatives. "The ruling power relations are the expression of the popular will, which means the majority of the rural population," Bünte told DW. 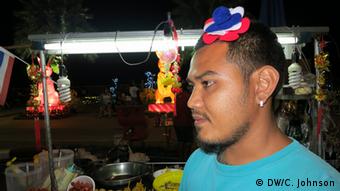 Food-seller "Boy": "Prices are going up and our business is going down"

"Boy," who sells somtam salad and BBQ seafood with his wife at their Thai-style mobile food stall attached to a motorcycle, says civil disobedience is mainly about injustice and rising prices.

He argues that the political divide in Thailand is misunderstood as a fight between rich and poor. He says poor people in southern Thailand despise Thaksin, while the northern poor are desperate for the money the government gives or promises them.

"Boy" and others also point to the alleged mishandling of Muslim separatism in southern Thailand along the Malaysian border which became a violent insurgency with more than 1400 dead under the Thaksin-led government.

In November 2004, at least seven protesters were shot dead in Tak Bai, and soldiers beat others and allegedly piled them into sealed vehicles. After a five-hour drive, 78 protesters were found dead by suffocation or organ collapse.

While regretting the deaths, Thaksin allegedly said military personnel did nothing wrong, and the men died "because they were already weak from fasting during the month of Ramadan."

Rights groups say more than 5,000 people have died during the conflict pitting 150,000 soldiers against an estimated 3000 to 9000 insurgents demanding an independent Islamic state. Rights groups have also accused Thaksin of sanctioning extra-judicial killings during Thailand's War on Drugs.

With warnings of violence and an increased army presence, tensions are high in Thailand ahead of Sunday's general election, which analyst Kim McQuay says will not end the political turmoil in the Southeast Asian nation. (31.01.2014)

Ballot-box blockades and a shortage of election staff prevented the smooth running of the Thai general poll. The full result won't be known for weeks, meaning little change to the current political crisis. (02.02.2014)