South Sudanese President Salva Kiir has arrived in Ethiopia for last-ditch peace talks amid international threats of sanctions if a deal is not reached by Monday. But he has voiced doubts that an agreement is possible. 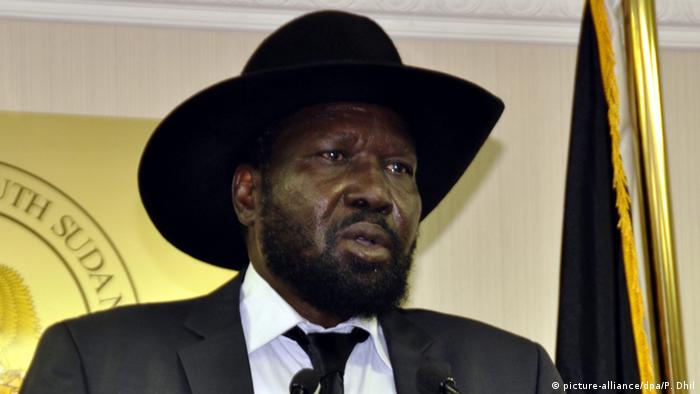 South Sudanese President Salva Kiir arrived in the Ethiopian capital, Addis Adaba, on Sunday for peace talks with rebel leaders and regional presidents, in a reversal of an earlier decision not to attend because of a split in rebel forces.

Before leaving the South Sudanese capital, Juba, Kiir warned, however, that it would not be possible to sign a lasting deal unless all opposition factions were included.

"A peace that cannot be sustained cannot be signed," Kiir said, but added that he felt "compelled" to join the talks.

"Even if I am not happy, I must show my face because if I don't go, negative forces will take me as the one against the peace that was going to be signed," he said.

The talks in Ethiopia are aimed at resolving a conflict that broke out in December 2013 after Kiir accused his former deputy, Riek Machar, of planning a coup. The fighting that ensued has divided the country along ethnic lines and has been marked by widespread atrocities on both sides, with tens of thousands killed.

An announcement by rebel generals on Tuesday that they had split with Machar has confused the situation amid the latest round of peace talks, and led to Kiir's initial decision not to attend the talks.

The latest round of negotiations, which is being mediated by the regional eight-nation Intergovernmental Authority on Development (IGAD), the United Nations, African Union, China and a "troika" of Britain, Norway and the United States, got under way on August 6.

The presidents of Uganda, Ethiopia, Sudan and Kenya were also attending the talks on Sunday along with Kiir and Machar.

Diplomats have warned the warring parties that any failure to sign a peace deal by Monday August 17 could result in sanctions and an arms embargo.

Previous rounds of peace talks have cost millions of dollars in expenses, but failed to produce any lasting deals, with at least seven ceasefires being agreed then almost immediately violated, sometimes within hours.

The conflict has left more than 70 percent of the country's 12 million people in need of aid, and some 2.2 million homeless, according to UN figures.