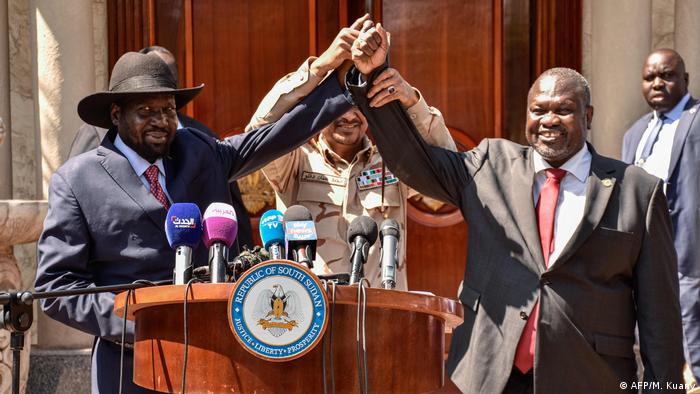 South Sudan was hoping to enter a new era on Saturday as the formation of a coalition government, also known as the "unity government," marked the end of a six-year civil war estimated to have claimed the lives of 400,000 people.

Three other vice presidents were also sworn in, while the cabinet was dissolved and will be re-formed to include more members of the opposition.

Machar promised that the government would work together to end the suffering of the people of South Sudan. Kiir, meanwhile, appealed to the Dinka and Nuer people, the two biggest ethnic groups in South Sudan, to forgive one another following their conflict.

"We will not take this country back to war. Enough is enough," Machar said, according to the DPA news agency, while Kiir was quoted as saying: "We formed the transitional government of South Sudan to end the suffering of our people."

South Sudan gained independence from Sudan in 2011 but was plunged into a civil war in 2013 when Kiir, of the Dinka group, sacked his then-deputy Machar, a Nuer, who went on to lead the main rebel faction.

There were two attempts at a peace deal in 2015 and 2018, but neither led to the formation of a stable government.

The new coalition was successfully formed after President Kiir agreed to reduce the number of states in South Sudan to 10 from the current 32. Machar had previously claimed that the 32 states were created to favor the Dinka ethnic group.

In exchange, Machar agreed to give Kiir responsibility for his security. Machar had earlier fled South Sudan and feared for his safety when the government formed after the 2015 peace agreement fell apart.

But there are still many issues that remain to be negotiated between the two factions, not least the creation of a single army from the rival forces.

Over 400,000 people died in the bloody civil war in South Sudan, while 2.2 million people have fled to neighboring nations. Over 1.4 million civilians are internally displaced in the country. Awut Deng Acuil, the country's foreign minister, told The Washington Post the new government would facilitate the return of people from neighboring countries.

However, several challenges remain unaddressed. According to a report by the UN Human Rights Council, thousands of civilians have been deprived of vital resources like food, as part of a strategy to deprive enemy communities of resources. The report also warned that conflict-related sexual violence was "widespread and pervasive," and that corruption was rampant in the government.

The move has come after weeks of local and international pressure. At least 380,000 people have died during the South Sudanese civil war, which created Africa's biggest refugee crisis since the Rwanda genocide. (21.02.2020)