Thousands of South African gold miners have gone on strike as a result of failed wage talks that are threatening the country's fragile economy. Last year, gold mine strikes triggered deadly violence between rival unions. 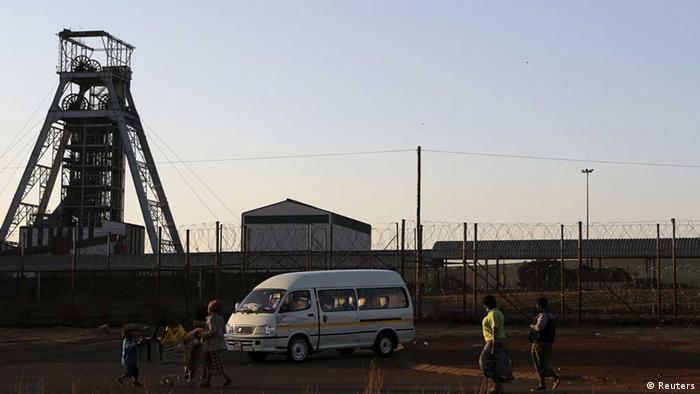 South Africa's National Union of Mineworkers (NUM), which represents two thirds of the workers in the country's gold mines, called for stoppages Tuesday night after talks between unions and companies broke down last week.

"Our members have not clocked in for the night shift, at several mines in the Carletonville area. The strike is on," Mbuyiseli Hibana, NUM regional secretary general, told the AFP news agency.

No exact attendance figures were given, however, Hibana estimated that about 14,000 miners had walked off the job in the gold mining town of Carletonville, south of Johannesburg.

The NUM is seeking a 60 percent pay increase for entry-level miners and the Association of Mineworkers and Construction Union (AMCU), is pushing for 150 percent. Companies say they cannot afford the hikes and the industry has offered to pay increases of up to 6.5 percent.

Russell: "Deal will be reached with striking miners"

Tens of thousands of gold mine workers in South Africa have began their strike on Tuesday (03.09.2013) after wage talks broke down. The strike is threatening to cause millions of dollars loss in the mining sector. (03.09.2013)

South Africa's economy is already suffering from auto and building sector strikes that have seen August vehicle export figures fall by 22.9 percent. Economists say the gold mine strikes could cost the country an estimated $35 million (26.5 million euros) a day.

South Africa was for decades the world's largest gold producer, but its share of production has declined from 68 percent in 1970 to six percent of the world total in 2012. Partly due to strikes, gold production last year fell by 12.4 percent, reaching its lowest level in over a century.

A turf war between the NUM and AMCU unions erupted last year, triggering violence that killed dozens of people. Tuesday's fresh strikes are likely to renew pressure on President Jacob Zuma ahead of elections next year.

"A strike hurts both sides. They must find a solution," Zuma said at a briefing with reporters in Pretoria.

Mining Minister Susan Shabangu said the government was willing to intervene to help both sides "find each other soon."

"If there is a need for government to intervene, we will engage the parties," she told Reuters.