Germany has withdrawn some of its diplomatic staff from Sudan following Friday's attack on its embassy by protesters angered by an amateur anti-Islam video made in the US. The US has also reduced staffing at its posts. 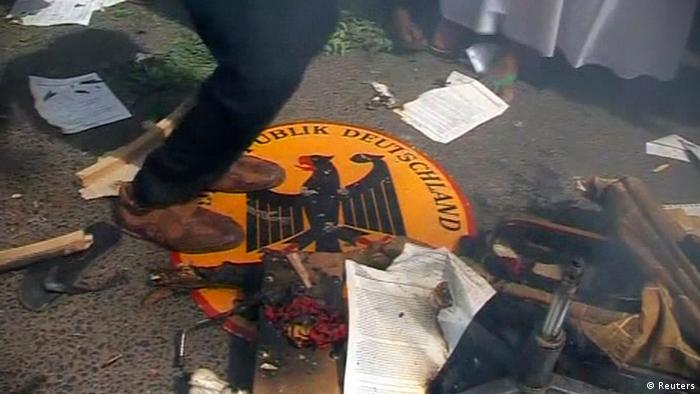 The German Foreign Office said on Sunday that it had reduced staffing at its embassy in Khartoum, Sudan, and had sent additional security personnel to help protect the outpost.

In addition, travel warnings for Sudan were increased, and the ministry recommended staying away from the German embassy there and avoiding demonstrations.

On Friday, protesters had stormed the German embassy in Khartoum, starting a fire and damaging the exterior of the building.

The incident was one in string of protests triggered across the Middle East by an amateur film made in the US that depicted the Prophet Muhammad as a womanizer and child abuser. Depictions of Muhammad are forbidden in Islam, and insulting the prophet is a strict taboo.

The United States also told "all family members [of diplomatic staff] and nonemergency personnel" to depart Khartoum. This came after Sudan denied a US request to station Marines at the embassy. The order to leave the embassy also applied to America's diplomatic presence in the Tunisian capital, Tunis.

Meanwhile, in Berlin, a group of far-right extremists known as Pro Deutschland announced they were reconsidering an idea to publicly screen the controversial film, "Innocence of Muslims."

The German news magazine Der Spiegel has quoted German Interior Minister Hans-Peter Friedrich in its Monday edition as saying he would use "every legal means" to stop such a screening.

In an interview with DW on Sunday, however, the group's deputy chairman, Alfred Dagenbach said after seeing the 14-minute video in its entirety that the organization was having second thoughts.

He added that the group's initial announcement on Friday that it would screen the video had come before the content of the film was entirely known, and that at the time, screening it had merely been an "idea."

Dagenbach said now that he had watched the video, he considered it "so disgusting that you actually can't support something like that."

In the past, Pro Deutschland has been involved in demonstrations that angered Muslims because of depictions of Muhammad and banners with crossed out mosques. However, the group is still viewed as a small, radical organization with no real political clout.