As the war between Georgia and Russia entered its fourth day, a war of words broke out across Europe, with some in former Soviet satellite states said Russia is returning to its Cold War tactics. 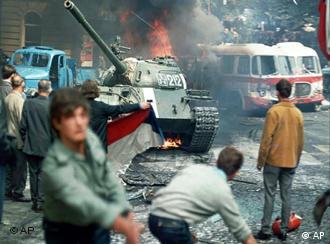 Some see parallels to the crackdown following the Prague Spring

With memories of Soviet domination still fresh in the minds of regional leaders, mistrust of Moscow has only increased throughout central Europe since Vladimir Putin became president in 2000. The new conflict in South Ossetia has not allayed any fears.

"Together with the bombs falling on Georgian cities ... the hope for a normal neighbor in the east has been ruined," said Poland's Dziennik newspaper in a commentary on Monday, Aug. 11.

"Those who have warned that Russia is an unpredictable partner were proven right," the article said, according to a translation by Reuters news agency. "[Russia is] driven by neo-imperial ambitions and unable to treat neighbors, especially those who had been in its sphere of influence, as partners."

Czech Foreign Minister Karel Schwarzenberg likewise caused shivers when he drew comparisons to the Russian strike inside Georgia with the bloody crackdown to prevent Czechoslovakia from leaving the Soviet orbit following the so-called Prague Spring.

"It's basically the Putin doctrine," said Svante Cornell of the Institute for Security and Development Policy in Stockholm. "Restoring Russian control over the former Soviet Union, irrespective of what those countries want, which is why this is so reminiscent of the episodes in Prague in 1968 and Budapest in 1956."

Calls on the EU to oppose Russian "imperialism" 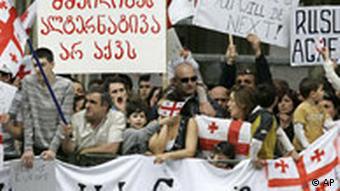 These sentiments come on the heels of a weekend statement made by Latvia's President Valdis Zatlers and his counterparts from Estonia, Lithuania and Poland in which the former Soviet states called on the EU and NATO to oppose Russia's "imperialist" policy towards Georgia.

"Russia's military strikes in Georgia toll a knell for many of Europe's hopes, such as the possibility of sharing common fundamental values with Russia," Ilves said.

Russia's ambassador to Latvia hit back, however, warning the Baltic states and Poland that they would pay for their criticism of the Kremlin over the conflict in Georgia, the Baltic news agency BNS reported.

"One must not hurry on such serious issues, as serious mistakes can be made that have to be paid for a long time afterwards," Alexander Veshnyakov was quoted as saying by BNS.

A spokesman for the Russian embassy in Riga confirmed the ambassador's comments to the AFP news agency but declined to elaborate.

The Baltic states' call for the EU to reconsider its strategic partnership with Russia echoes cries made by Georgia's envoy to the EU, Salome Samadashvili, on Monday. 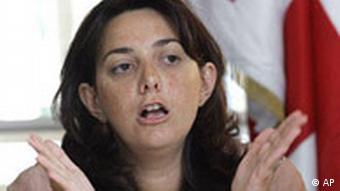 "There has not been a properly worded public official statement that would tell them (Russia) clearly that they have to stop and they risk their future relationship with the EU if they don't," she told reporters in Brussels.

Calling the situation "extremely difficult," she said the EU should make use of all its political and economic clout.

"There are (economic) measures and there are political costs," Samadashvili said. "It should be made clear that the Russian Federation should bear these costs" if it continues its attacks on Georgia.

Meanwhile, around 300 Georgians gathered outside Russia's EU mission in Brussels to call for an end to the hostilities. The protesters unfurled Georgian flags and chanted "Russia, state terrorist" and "Putin, terrorist." They also held up banners depicting tanks with slogans such as "no Soviet Union" and "shame on you Russia."

Russia rejected Monday an EU proposal to end the conflict with Georgia over South Ossetia and Abkhazia. Georgia continues to use military force, making a deal impossible, a Kremlin spokesman told reporters. (11.08.2008)

The European Union's attempt at mediation in the spiraling conflict between Russia and Georgia is currently the bloc's only realistic option, according to EU-Russia experts who spoke to DW-WORLD.DE. (11.08.2008)

As UN diplomats engaged in acrimonious finger-pointing, the fighting in the Georgian breakaway region of South Ossetia intensified with reports of Russia sinking a Georgian warship and attacking an airfield near Tbilisi. (11.08.2008)