The IPO was the largest-ever in Japan. SoftBank Group's chief, Masayoshi Son hopes to transform the company from a Japan-based telecoms operation to a global hi-tech investment firm. 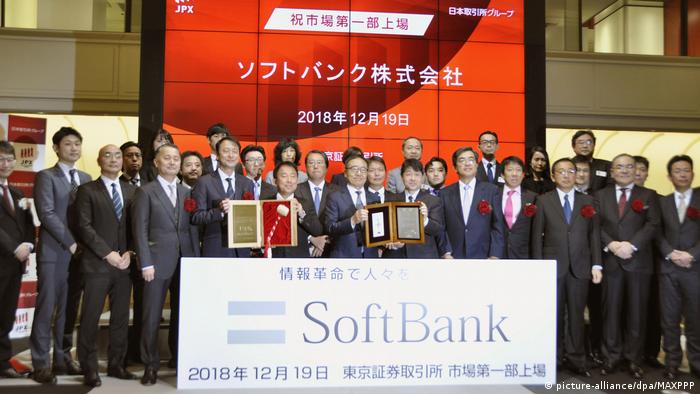 Japan's telecoms giant Softbank went public on the Tokyo stock market on Wednesday, in what was one of the world's biggest Initial Public Offerings (IPO). Despite raising a record amount, shares traded well below the IPO price.

Softbank was founded in 1986 as a software, broadband, and fixed-line telecommunications company, and it was the first mobile carrier to offer the Apple iPhone in Japan.

The company has listed 1.6 shares, roughly one-third of the shares held by parent company Softbank Group.

A spokesman for the firm confirmed that Softbank had raised around 2.65 trillion yen through the mobile unit's IPO, making it Japan's largest ever. But the stock performance was disappointing, opening at 1,463 yen (€11, $12.5), down from the 1,500 yen IPO price.

Softbank's stock market debut follows an embarrassing moment for the firm earlier this month, when tens of millions of SoftBank and the UK's O2 customers were unable to access data due to a glitch with software made by Sweden's Ericsson.

The IPO is part of a wider strategy by SoftBank Group's chief, Masayoshi Son to transform the company from a Japan-based telecoms operation to a global hi-tech investment firm.

A part of this strategy is the company's Vision Fund, worth an estimated $100 billion, which has taken stakes in some of the most notable tech firms, including Uber, Slack, WeWork and Nvidia. The IPO would help add more investment for the project.

But Son has drawn investor concerns for his closeness to Saudi Arabian Crown Prince Mohammed bin Salman, particularly after the killing of Saudi journalist Jamal Khashoggi.

Roughly half of the Vision Fund investment money comes from the kingdom.

A consortium led by Japan's SoftBank will buy a large number of shares of ride-hailing firm Uber, after shareholders elected to sell their shares, handing new Uber CEO Dara Khosrowshahi a major victory. (29.12.2017)

Japanese mogul Masayoshi Son has appeared with President-elect Donald Trump to announce a $50 billion investment in the US. The money is projected to come from Softbank's previously announced Vision fund. (07.12.2016)