If the stats are right, you're a social network user; sites like Instagram are more popular than ever. The images of strangers' bodies and lifestyles are affecting how we see ourselves - in ways you might not expect. 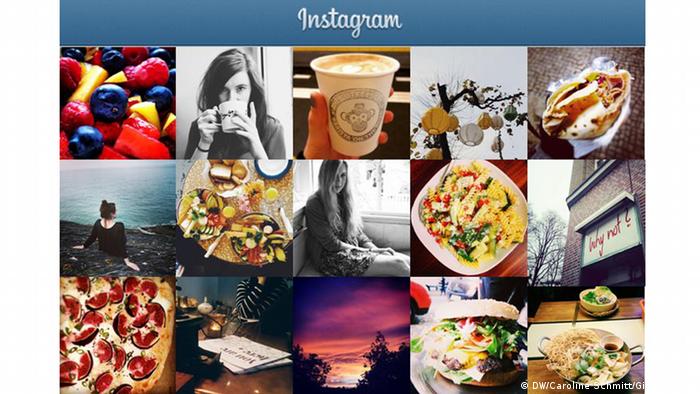 While many his age were out socializing, Thomas was lying in bed, his heart weak, his digestive system plagued by disease. Six years after he was first diagnosed with anorexia nervosa, the 20-year old had starved his body to the brink again.

The pursuit of physical ‘perfection’ had got him here."I believed that I needed to look a certain way to have other people like me and to make friends," he says.

For Thomas, looking “a certain way” meant being skinnier. Being thin was ‘in’ in Thomas’ hometown, Sydney, in Australia. More than that, ‘thin’ was everywhere, as it still is across vast swathes of the western world where food is plentiful: placarded onto billboards, all over the movies and magazines. And it was particularly easily accessible on one internet site Thomas used every day: Instagram. 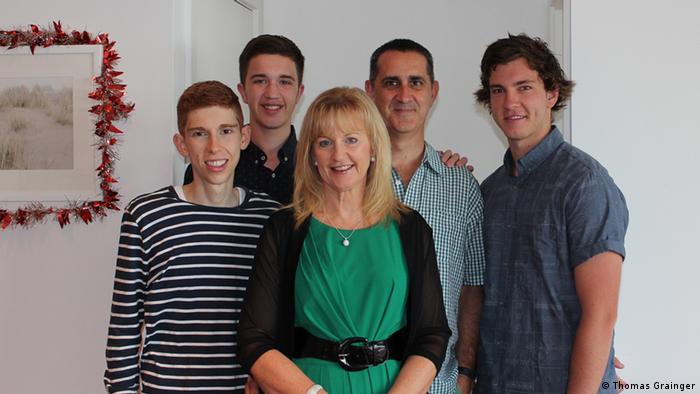 “I was constantly being bombarded with images of people with the 'ideal body', photos of people's food and posts about dieting and exercise. I would constantly compare myself to other people online and in Instagram photos and thought that if could only try to be more like them, I would be happier,” he says.

Thomas's anorexia led him to restrict what he ate further or go on a new diet “in the guise of a health kick”, all in an effort to be more like the people he saw on the site.

“Looking at their pictures made me feel less about myself,” he adds.

Claire Mysko, director of programs at the National Eating Disorder Association (NEDA) in the United States, says that is a typical reaction of eating disorder sufferers. "There is a lot of emphasis in presenting yourself in a 'perfect' way," she says. "That can reinforce patterns of thought that anorexia patients tend to suffer from: perfectionism and comparison."

You might think that the images Thomas perused were ones that Instagram and other social networks have recently received most criticism for: so-called "thinspiration" photos posted by the ‘pro-ana’ community - people who promote anorexia as a lifestyle choice. Go on the social network and you’ll see there are plenty of them: searching one 'pro-ana' hashtag brought up almost eight million posts. That's a significant number, even in relation to the 47 million hits the famous hashtag #foodporn brings up - and especially considering Instagram has been trying to fight pro-ana hashtags for years, with NEDA’s help. 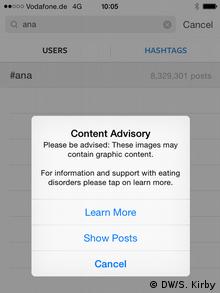 But actually Thomas was just looking at everyday photos, much like the rest of us. The type that you and I post, that portray the best sides of our lives, diets and bodies. The ones we probably think of as harmless.

Still, Thomas insists Instagram by no means caused his illness, rather it triggered feelings of anxiety and exacerbated thoughts that were already there, something many experts, including Mysko, and eating disorder sufferers agree with.

Instagram has tried to combat this - it’s banned hashtags that promote self harm, including “proanorexia”, “thinspiration” and “probulimia” and threatens to ban those encouraging such practises.

But the ‘pro-ana’ community attempts to work around this, creating differently spelled and more elaborate hashtags to continue communication. In this way, users are able to filter content on the site narrowing down their posts so they receive just one type of message.

“People are able to quickly link up with those who share an eating disorder and trigger each other's unhealthy behaviors,” says Thomas. He has now recovered and understands the negative spiral he got into.

With social media being relatively young, research is limited as to its direct impact on eating disorder sufferers. There are studies, however, that suggest that the number of 19 to 30 years olds suffering from eating disorders, such as anorexia, has increased. Figures published in the US show that the average number of diagnoses rose by 19 percent between 1999 - 2000 and 2005 - 2006.

Meanwhile, social media has continued to become more popular - between 2013 and 2014 alone, the use of Instagram, in particular, rose to 53 percent of online adults aged between 18 to 29 years old in the US, up from 37 percent the year before. And what’s more, studies have indicated that social networks in general can transmit body image impressions to others, even where they might not have had direct exposure to such images themselves.

A social approach to recovery

Still, social media exposure is not all bad when it comes to eating disorders. Mysko, of NEDA, says there is a growing mass of anecdotal evidence that Instagram can also have a positive effect on eating disorder sufferers.

Pro-recovery groups now often use hashtags that people who are in the depths of eating disorders search for and post positive, supportive comments under photos. "It is like an intervention,” Mysko says.

Paola Tubaro, an expert on pro-ana sites, is also not overly concerned by the ‘thinspo’ posts that Instagram has been battling. She believes that people are ultimately inclined to more moderate points of view. What is more, she thinks Instagram can provide an antidote to the social isolation many sufferers face.

“Small groups of peers, especially online, provide a welcoming and non-judgmental environment where persons with eating disorders can share their concerns,” says Tubaro, who specializes in economic sociology at the University of Greenwich.

This became true for Antonia, the 20-year-old, who reporter Gönna visited in Sweden. Antonia was taken into hospital after starving herself for half her year. On the verge of death, she created a blog through Instagram called “Fighting Anorexia”, which helped her connect with people supportive of her efforts to overcome the disease.

It’s an approach that has also helped others. Like “Bella”, a 27-year old schoolteacher living in London, who runs a blog bellabirdie.blogspot.com documenting her ongoing recovery from anorexia. Her name is an alias.

“When you connect with people who are similarly affected by eating disorders, you can receive comments of encouragement from people all over the world. It’s almost like getting a virtual hug,” she says.

For "Bella", her phone is her most precious commodity as it allows her to find support at any time of day. “I can connect with mental health professionals or other affected people while I’m commuting on the tube in the morning, or while I’m in bed at night unable to sleep.”

Getting over eating disorders

In the US, 20 million women and 10 million men suffer from an eating disorder at some point in their lives, according to NEDA. For many it can be a struggle to recover and Tubaro says only a handful manage it while remaining active on Instagram, as continued use of the site makes it difficult for sufferers to distance themselves from the eating disorder community.

Those who are able to recover from anorexia provide "stories for others to follow," Tubaro says. 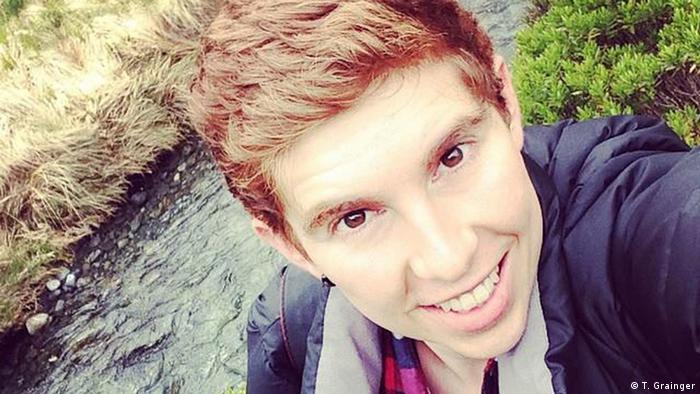 Perhaps Thomas is one of them. Hardly a year after he lay cripplingly ill in bed at home, he seems to have come so far. He is now back to a healthy weight and works as a wellness coach and nutritional therapist. For him, one realization is key:

“Life's too short to try and be someone or something that you're not."

How do photos and posts on social networks influence how you feel about yourself? Join the discussion and leave a comment below.

If you or someone you know of is suffering from an eating disorder, there are places you can find help. We are unable to list all of the associations here, but many countries have a least one organization offering support for those with eating disorders, which can be found through an online search.

Astronauts, pop stars, Ellen at the Oscars, even you and me; we’re all taking part in the #selfie craze. But some are annoyed, say selfies are narcissistic and unhealthy, turning us into duck-faced robots. Really? (21.10.2014)