Early regional election results in Germany's most populous state, North Rhine-Westphalia, show the Social Democrats to be the top party. The party may be set to govern in coalition with the Greens. 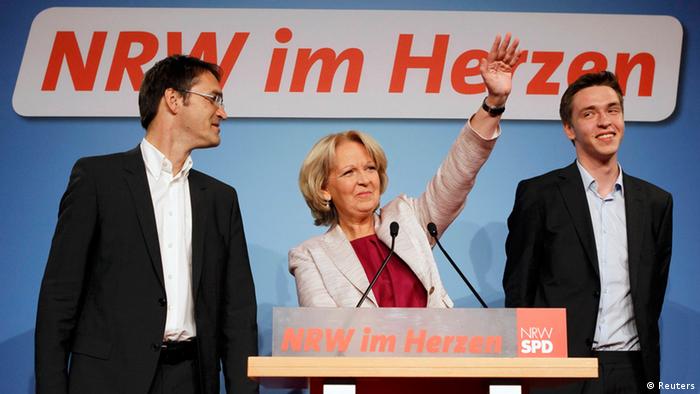 Voters in the German state of North Rhine-Westphalia gave the Social Democrats (SPD) a clear majority in contrast to 2010, when the Christian Democrats (CDU) eked out a 0.2 percent margin of victory.

According to preliminary official figures early on Monday, the SPD won 39.1 percent of the vote - a gain of 4.6 percent.

The CDU, Chancellor Angela Merkel's party and lead partner in the national coalition, took in 26.3 percent, a decrease of 8.3 percent from 2010. This represents the party's worst result in the state since World War II.

The poor showing prompted the resignation of the CDU's state chairman, Norbert Röttgen, who also serves as Merkel's environment minister at the federal level.

Röttgen took the blame for the party's losses in the polls, and said the loss was unequivocal. He added that is was a "bitter day" for the CDU.

The big question mark is the exact finish of the Greens. According to the early figures, they finished with 11.3 percent, which would give them a slight majority together with the SPD. Should the majority hold, the two parties would likely form a coalition government. This pairing governed North Rhine-Westphalia in a minority coalition for 22 months after the last elections in 2010, but snap elections were called when the regional parliament failed to pass a draft budget.

Merkel's coalition partners at the national level, the Free Democrats (FDP), polled better than last time with a gain of 1.9 percent, making a total of 8.6 percent.

Relative newcomers, the Pirate Party, made it into the NRW parliament for the first time, polling 7.8 percent with the biggest gain of the day, 6.2 percent. The Left party, which had just cleared the required 5 percent hurdle necessary for parliamentary representation in 2010, did not repeat the performance this year and will not be represented. It polled only 2.5 percent.

Initial estimates place the voter turnout at 59.3 percent, the same as 2010.