Six people, including former senior police officers, have been charged with criminal offences related to the Hillsborough disaster. The charges come after a prolonged campaign for justice by bereaved families. 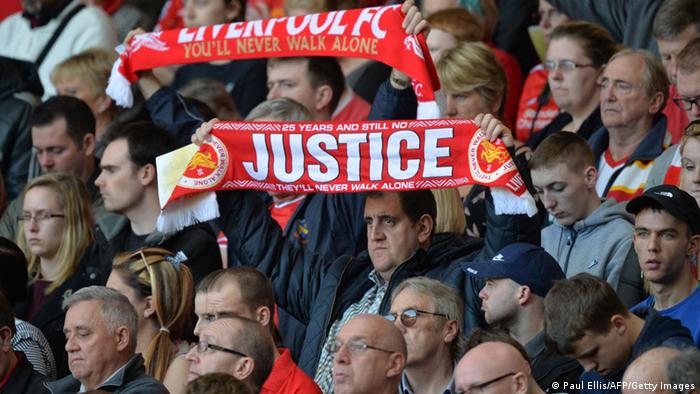 Six people were charged on Wednesday over their involvement in the 1989 Hillsborough stadium disaster in England that killed 96 people.

The United Kingdom's Crown Prosecution Service (CPS) began criminal proceedings against four senior police officers, a lawyer and a club official in relation to the deadly human crush at the April 1989 FA Cup semi-final between Liverpool and Nottingham Forest.

Some 766 people were injured when police opened up turnstiles leading to two fenced-in, standing-room pens and fans rushed in before kick-off at the Hillsborough football stadium in Sheffield.

The victims were crushed against metal anti-riot fences or trampled underfoot. Many suffocated in the crush.

"I have decided that there is sufficient evidence to charge six individuals with criminal offences," said Sue Hemming from the CPS.

Former South Yorkshire Police (SYP) officer David Duckenfield, who was the match commander on the day of the disaster and ordered the turnstiles to be opened, was charged with "manslaughter by gross negligence."

"We will allege that David Duckenfield's failures to discharge his personal responsibility were extraordinarily bad and contributed substantially to the deaths of each of those 96 people who so tragically and unnecessarily lost their lives," said the CPS.

Former SYP Chief Norman Bettison was charged with four offences of misconduct in public office relating to "telling alleged lies about his involvement in the aftermath of Hillsborough and the culpability of fans."

The other defendants, Donald Denton and Alan Foster, along with SYP solicitor Peter Metcalf, were charged with intending "to pervert the course of public justice" by allegedly attempting to cover up the police's culpability in the crush at the FA Cup semi-final.

British Prime Minister Theresa May said she welcomed the decision after many years of waiting.

"All we want is accountability, nothing more and nothing less," said campaigner Margaret Aspinall, whose 18-year-old son, James, died in the disaster.

The original inquest found the deaths were accidental but the families challenged the verdict and campaigned for a new inquiry. The verdicts were overturned in 2012 after a far-reaching inquiry.

The disaster led to a sweeping modernization of stadiums across England, including the introduction of all-seater grounds.