Shots fired as troops enter Ukrainian base Belbek in Crimea

Troops have stormed the Crimean base of Belbek, with reports of shots fired. Ukraine has lost control over many of its military facilities this week following the peninsula’s decision to join the Russian Federation. 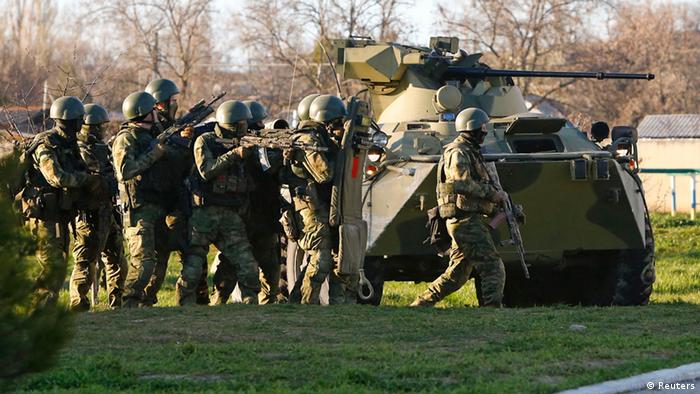 Soldiers entered a Ukrainian airbase in Belbek on Saturday. The military facility lies in western Crimea near the port city of Sevastopol.

Initial reports indicated that armored vehicles had broken through the base's security point and that shots had been fired.

The base's commander, Colonel Yuliy Mamchur, said Russian forces planned to take him in for questioning, according to Reuters news agency. He also said that one Ukrainian soldier had been hurt during the takeover.

In a separate event, some 200 pro-Moscow demonstrators stormed an airforce base in Novofedorivka, Crimea, the AFP news agency reported on Saturday. Ukrainian soldiers were later seen leaving the facility while Russian officers reportedly stood guard outside.

Pro-Russian troops have gradually taken control of Ukraine's military bases on the Black Sea peninsula in recent days. The move follows Crimea's secession vote, which saw it reject Kyiv's authority in favor of becoming a member of the Russian Federation.