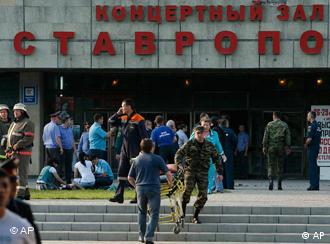 Rescue Services worked throughout the night

At least seven people have been killed and dozens more critically injured in a bomb attack in the southern Russian of Stavropol. The blast struck a Chechen cultural center late Wednesday.

The bomb was reportedly packed with steel pellets hidden in a juice carton. Officials said that many of those receiving treatment were in a critical condition.

Yekaterina Denilova, who works with the regional investigative committee, told news agency AFP that around 70 people have already been questioned in connection with the attack, for which no groups have so far claimed responsibility.

Stavropol is located on the northern rim of the Caucasus, in areas Russia has been battling a Muslim insurgency and terror attacks in Chechnya, Ingushetia and Dagestan. However the city has rarely seen the sort of violence experience in other areas in the region.

Five suicide bombers have hit targets in Russia within one week, with attacks in Ingushetia following bomb blasts in Dagestan and on the Moscow metro. (05.04.2010)

A 28-year-old teacher was identified by her parents as the second suicide bomber involved in the Moscow metro attacks. The news follows another bombing that derailed a train in Dagestan earlier on Sunday. (04.04.2010)

Russia said it had invited the Red Cross and the UN to visit a prison where dozens of prisoners of war died. Meanwhile, Ukraine's president ordered residents to leave the eastern Donetsk region. DW rounds up the latest.