European leaders have condemned a Burmese court's decision to extend the house arrest of pro-democracy activist Aung San Suu Kyi. But others say it signals that the military regime is somewhat susceptible to pressure. 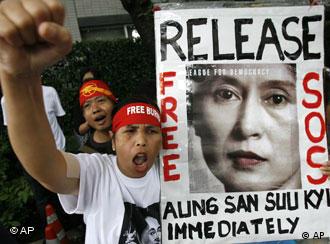 The verdict came after a court in Rangoon, Burma's largest city, found that Suu Kyi had violated the terms of her current house arrest by allowing an American national to stay at her home. The court sentenced her to three years imprisonment, but Burmese junta leader Senior General Than Shwe immediately commuted the sentence to 18 months house arrest.

The case of Nobel Peace Prize laureate Suu Kyi has attracted broad international attention, and European leaders were quick to criticize the verdict.

"I am both saddened and angry at the verdict today, August 11, following the sham trial of Aung San Suu Kyi," British Prime Minister Gordon Brown said in an official statement. "This is a purely political sentence designed to prevent her from taking part in the regime's planned elections next year."

A spokesperson for the EU rotating presidency, currently held by Sweden, also rejected the verdict and called upon the Burmese government to free the pro-democracy leader immediately.

Burma has been ruled by a military dictatorship since 1962. The currently leadership has scheduled a national election for December of next year in a bid to bolster its own legitimacy both within Burma and in the eyes of the international community.

Suu Kyi has been under house arrest for 14 of the past 20 years -allegedly for presenting a threat to national security. 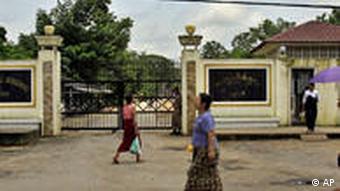 The eighteen-month extension of Suu Kyi's house arrest means that Burma's most potent symbol of democracy won't be able to play an active role in next year's vote. But the opposition leader could have been sent to jail, and experts say the fact the ruling junta did not exercise that option is a sign that Burma's leaders are at least concerned with maintaining appearances.

"I see it somewhat positively," Axel Bruns - a German Burma expert who has lived in the country for many years - told Deutsche Welle. "No one was expecting an acquittal, and there was the prospect of a five-year prison term, so this is perhaps a sign of moderation."

Jasmin Lorch, a visiting fellow at the German Institute for International and Security Affairs in Berlin, has a different take on the verdict.

"Of course, this was a show trial," Lorch said. "She was never proven to have committed any crimes and her party is in fact legal even under highly repressive Burmese martial law."

"But the verdict," Lorch added, "shows the Burmese government is - to a limited extent - susceptible to international pressure and pressure from people inside Burma who support the democratic opposition."

The Burmese government's decision to extend Suu Kyi's arrest may be a sign that the military junta realizes there are limits on its power. But it also puts her opposition National League for Democracy party (NLD) in a bind concerning the planned 2010 elections.

Rock and a hard place 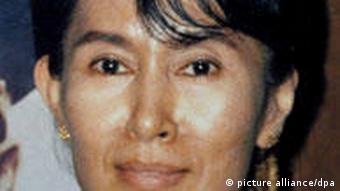 The NLD won a convincing majority in elections in 1990, the last remotely fair vote in Burma. That would have made Suu Kyi the prime minister, but the military leadership immediately nullified the result. Now her party must decide whether to take part in a poll that shows little prospect of being just.

The NLD has said it plans to boycott the election, but it's difficult to tell whether that's the right strategy.

"The opposition probably won't take part in the vote, which I think is a shame personally because they should try to put up stumbling blocks for the government," Bruns said.

"The dilemma for the opposition is: do they participate in the election without their leading symbolic figure and legitimate the process, or do they risk being banned outright for not taking part?" Lorch said.

And although international pressure may have helped convince the Burmese leadership not to incarcerate Suu Kyi, there's little the world can do to prevent the government from manipulating the 2010 poll.

"The international community has few opportunities to exercise any real influence," Lorch told Deutsche Welle. "The Burmese government is perhaps somewhat more sensible to what their neighbors in Asia think, but even there, the possibilities are limited."

If so, that leaves the Burmese pro-democracy movement and its leader Aung San Suu Kyi essentially on their own and still in a relatively precarious position.